Baltimore’s harbor and the streams that feed into it again merited a failing grade on their 2013 annual report card, indicating the waters around the metro area suffer from continued loads of nitrogen, phosphorus, sediment and garbage.

The report card, which is part of the Healthy Harbor initiative of Blue Water Baltimore and the Waterfront Partnership of Baltimore, looks at multiple indicators of human health and pollution, and maps where they are, before giving its grade. Factors include dissolved oxygen, nitrogen, phosphorus, chlorophyll a and water clarity. It also looks at conductivity from chemicals, particularly those laden with salt, and fecal coliform bacteria, which is coming from sewage and septic systems.

Baltimore’s waterways scored poorly in all categories except dissolved oxygen and water clarity. Baltimore’s streams actually scored an A in turbidity/clarity, in part because the cloudiness of a stream is a localized and temporary condition.

Even with the grade of F, the state of Baltimore’s water was better in 2013 than it had been in 2012, which was the first year that the group began monitoring the waterways. In 2012, the harbor scored a 42 percent, compared with 2013’s 51 percent. The tidal Patapsco River improved from 40 percent to 55 percent. Last year, the group did not sample streams; in 2013, they scored 57 percent — indicating they are heading into D territory.

This year, some of the streams in the Gywnns Falls watershed earned a C-minus, but many in both the Gwynns and the Jones Falls still scored an F.

So they went from an F-- to and F-?  That's real progress. No wonder the urbanite liberals who populate the environmental movement are trying to make up for it by screwing the agricultural community. 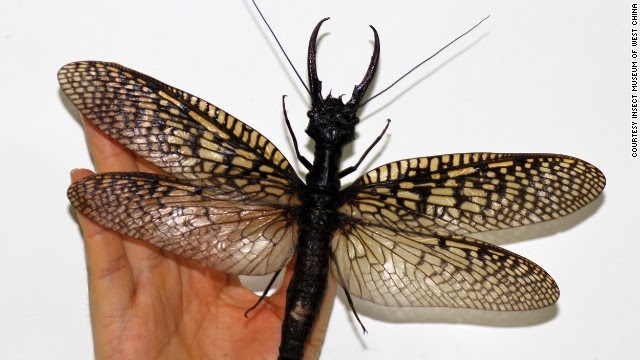 But they should be careful, you don't want your streams to become too clean or they might be invaded by the Giant Dobson Fly:


According to the Insect Museum of West China, local villagers in the outskirts of Chengdu handed over "weird insects that resemble giant dragonflies with long teeth" earlier this month. Several of these odd critters were examined by the museum and found to be unusually large specimens of the giant dobsonfly, which is native to China and Vietnam.

The largest one measured 21 centimeters (8.27 inches) when its wings were open, according to the museum, busting the original record for largest aquatic insect held by a South American helicopter damselfly, which had a wingspan of 19.1 centimeters (7.5 inches).

Large enough to cover the face of a human adult, this scary-looking insect is also known among entomologists as an indicator of water quality, says the museum.
The giant dobsonfly makes its home in bodies of clean water and is highly sensitive to any changes in the water's pH as well as the presence of trace elements of pollutants. If the water is slightly contaminated, the giant dobsonfly will move on to seek cleaner waters.

The insect can be found in other provinces in China, India's Assam state, and in northern Vietnam. This is the first time it has appeared in Sichuan province.

It wouldn't be our first invasive species from China.  FYI, we have Dobson flies in the US too, although not as large.  The ominous looking pincers are present only in the males and are reported to be sex toys and not weapons.