Admin Had Forewarning on Immigrant Crisis

It's not a good crisis unless you can take advantage of it. From this morning's Post: 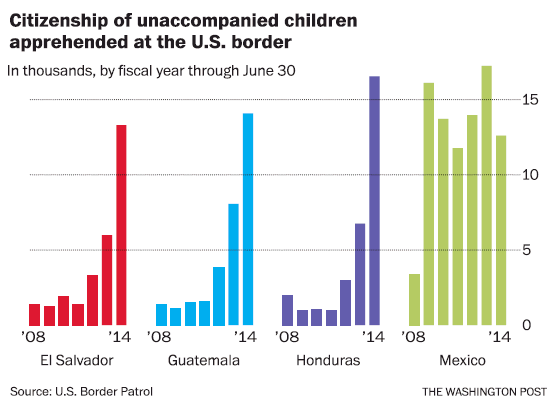 
Nearly a year before President Obama declared a humanitarian crisis on the border, a team of experts arrived at the Fort Brown patrol station in Brownsville, Tex., and discovered a makeshift transportation depot for a deluge of foreign children.

Thirty Border Patrol agents were assigned in August 2013 to drive the children to off-site showers, wash their clothes and make them sandwiches. As soon as those children were placed in temporary shelters, more arrived. An average of 66 were apprehended each day on the border and more than 24,000 cycled through Texas patrol stations in 2013. In a 41-page report to the Department of Homeland Security, the team from the University of Texas at El Paso (UTEP) raised alarms about the federal government’s capacity to manage a situation that was expected to grow worse.
. . .
Federal officials viewed the situation as a “local problem,” said Victor Manjarrez Jr., a former Border Patrol station chief who led the UTEP study. The research, conducted last year, was funded by the Department of Homeland Security and published in March. A broader crisis was “not on anyone’s radar,” Manjarrez added, even though “it was pretty clear this number of kids was going to be the new baseline.”

While it's not in the online edition, the helpful graphic was on the front page of the dead tree edition.


Massachusetts Governor Deval Patrick (D) said that the Obama administration asked whether his state had facilities to house up to 1,000 illegal immigrant children at military bases or unused shopping malls.

On Friday, Patrick announced that he proposed two military bases where illegal immigrants can be housed. He said Joint Base Cape Cod in Bourne and Westover Air Base in Chicopee would have "spaces for children to sleep, eat, play and go to school," and "the average stay for children sheltered there would be 35 days." He said the federal government would pick up the tab.
. . .
Patrick cited America's history of giving refuge to various groups fleeing famine and persecution, as well as his personal faith in deciding to propose facilities in his state to house illegal immigrants. Mayors from surrounding communities, though, raised concerns about the strain on their budgets, while officials at the military bases complained that they had not even been informed that their facilities, which do not have room to house extra people on the weekends, were being considered.

Elections have consequences.  You voted for this, even if you weren't aware of it.