While it would make for an interesting bookmark, it's not terribly convenient with a Kindle or Nook.


Poor modifier placement from the E! headline writers; thanks to Prof. Geoffrey Pullum (Language Log) for the pointer.

Note that I’m not claiming the headline is “grammatically wrong” in some objective sense — but it’s jarring and potentially confusing.

But we knew what she meant.  It appears to be a new "movement" is coming.


As the NY Times noted in their piece last year regarding the return of pubic hair, "For centuries of artistic tradition, the absence of pubic hair was merely an illusion. Renaissance artists depicted the female pelvis in smoothed stone or oil-painted shadow." And now, Brave Artist Dov Charney is taking that taboo on with his latest window display... or maybe he just needed a new way to sexualize young women. UNISEX PUBES MADE IN AMERICA $49.99! 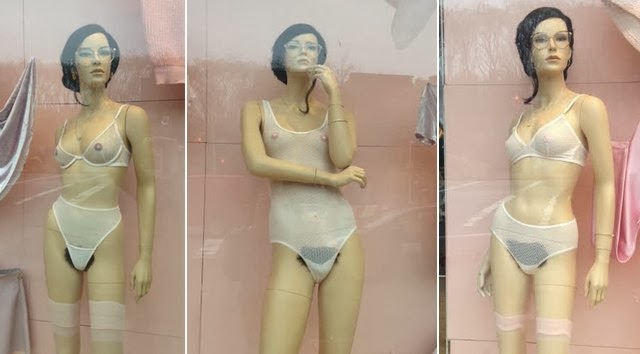 I don't even remember bushes quite that extravagant in the old Playboys from the fluffy 80's. (NSFW link). It's interesting that pubes are in a fashion cycle much like short skirts?  Does their presence, degree of grooming, relate to the economy? It must mean something.

And Ann Althouse repeats the question: Does waxing make me a bad feminist?

Yet here I am, month in and month out, dropping my pants for a stranger, letting her slide hot, green, organic wax along my vulva, around my labia, and across my lower abdomen with a thick, pale wooden popsicle stick just so I can feel “clean.” How can I subject a part of my body with such a complicated narrative to this hedonistic ritual and still call myself a feminist?

No, but it does make you a rich bitch; a poor girl would do it herself.