The big story today in Obamacare Schadenfreude has to be Preznit Obama's decision decree that the business mandate requiring businsses with 50 or more employees provide insurance, or pay a tax has been delayed again, beyond the reach of this years mid-term elections, and presumably beyond affecting the 2016 elections much as well.


For the second time in a year, the Obama administration is giving certain employers extra time before they must offer health insurance to almost all their full-time workers.

Under new rules announced Monday by Treasury Department officials, employers with 50 to 99 workers will be given until 2016 — two years longer than originally envisioned under the Affordable Care Act — before they risk a federal penalty for not complying.

Companies with 100 workers or more are getting a different kind of one-year grace period. Instead of being required in 2015 to offer coverage to 95 percent of full-time workers, these bigger employers can avoid a fine by offering insurance to 70 percent of them next year.

Why would we have to pass the law to find out what's in it?  What's in it clearly has no particular relevance to  how it's being enforced.  Apparently the Preznit has used the fact that his name is invoked in it's popular title to assume that he have the powers to change the law on a whim.


“If unilateral delays were an Olympic sport, the White House would sweep the gold, silver, and bronze,” House Energy and Commerce Committee Chairman Fred Upton (R-Mich.) said in a statement. “The White House is in full panic mode, and rather than putting politics ahead of the public, it is time for fairness for all.”

Originally, the employer mandate — which affects companies employing 72 percent of all Americans — was to have gone into effect Jan. 1, at the same time the law began requiring most Americans to have health insurance.

A senior administration official, who briefed reporters on the proposal on the condition of anonymity shortly before the rule became public, said the Treasury Department decided to allow medium-size businesses more latitude because they “need a little more time to adjust to providing coverage.”


RULE OF LAW: Mike Lee: Latest Obamacare delay is ‘lawless’ — ‘he is not an emperor.’


President Obama’s latest delay of the employer mandate is yet another “lawless” change to Obamacare, according to Sen. Mike Lee, R-Utah, who said Attorney General Eric Holder still hasn’t provided the legal basis for the last delay.
“[Obama] has no authority to do that,” Lee told the Washington Examiner after his speech on higher education reform at the Heritage Foundation. “He’s acting outside of what the law authorizes him to do and this has got to stop. At some point the president of the United States has to recognize that we are a nation that operates under a system of laws. He is not an emperor. He is not a super-legislature. And he doesn’t have the power to just trump what Congress does.”


Related: Obama: “As President I Can Do Whatever I Want.”


President Obama made what turned out to be an ill-timed joke while visiting Monticello with French President Francois Hollande.
“That’s the good thing as a president, I can do whatever I want,” Obama joked while walking to a typically off-limits terrace at the home of Thomas Jefferson in Charlottesville, Va., according to a pool report.
Reporters received the email shortly after the Treasury Department announced that it would again delay the Obamacare employer mandate for midsized businesses until 2016.

From Smitty at The Other McCain: Can You Make #ObamaCare Other ThanHistory’s Most Expensive Pile Of Bollocks? 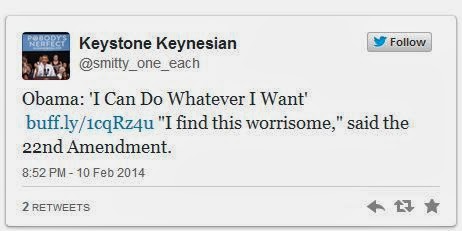 The new delay has, of course, pushed the OMB report of 2.5 million equivalent jobs lost to Obamacare to the side, but there's still some action there:


Now you can have the wide-open freedom of funemployment.


It’s no coincidence that the left seems rather Orwellian at times; after all, Ingsoc in 1984 was Orwell’s 1949 warning regarding what English Socialism could metastasize into a generation down the line. Why not American socialism?

One of the left’s current (and frequently Orwellian) buzzwords is “sustainability.” Lately, based on recent headlines, the left seems to reaching peak Orwell. Is such a condition sustainable? There seem to be an enormous amount of euphemisms, doublethink and moral evasions in the headlines these days. Here’s a just a taste:


In order to play the losing hand the left have chosen to deal to themselves and the rest of the country via Obamacare, some Ministry of Truth-style euphemisms regarding work and employment have recently become necessary. As Michael Goodwin noted yesterday at the New York Post, “America now has a government that views work as a trap and celebrates those who escape it”:
That is the upshot of last week’s remarkable exchange over ObamaCare. It began when the head of the nonpartisan Congressional Budget Office reported that the interplay of taxes and subsidies in the law “creates a disincentive for people to work.” The report predicted the mix would lead to fewer hours worked, costing the equivalent of nearly 2.5 million jobs.
In response, President Obama’s spokesman pleaded guilty — with pride and pleasure.
“Opportunity created by affordable, quality health insurance allows families in America to make a decision about how they will work, or if they will work,” Jay Carney said. Harry Reid and Nancy Pelosi applauded the law for freeing people from “job-lock.”
They never mentioned the implications of this distinctly Obama-ish New Deal. The subsidies that enable some Americans to decide “if they will work” mean higher taxes from those who must or want to work.

Meanwhile, the Obamacare websites, which have actually, after much fits and starts, signing some people up, are experiencing more hick ups due to the size, and interconnected nature of the the huge software project.


The Obama administration on Monday said people hoping to enroll in health coverage for March 1 may have trouble applying by Saturday's deadline because of a planned 62-hour maintenance shutdown of a Social Security Administration computer system.

The U.S. Centers for Medicare and Medicaid (CMS), the lead Obamacare agency, said the shutdown will prevent applicants from verifying their Social Security numbers and other data through the federal website, HealthCare.gov. Those unable to enroll because of the outage can request special enrollment for coverage beginning March 1, CMS said.

The Social Security computer system will be down from 3 p.m. EST (2000 GMT) on Saturday until 5 a.m. EST (1000 GMT) on Tuesday, February 18, CMS said. CMS said those who have already completed an application will still able to shop or select a plan through the website.

Washington (the state, not the District) is finding that the shrunken networks for Obamacare are starting to affect children's health.  I thought we did it for the children?

You voted for him. Suck it up.

Remember, the Republicans have, and have always had, real alternatives.
Posted by Fritz at 9:56 AM