There’s a lot of hullabaloo recently about Natural Gas being too leaky to be a good substitute for coal. The claim is based on the fact that methane has a much larger GHG potential than carbon dioxide. But, the study those claims are based on can be interpreted two ways. I tend to think that the leak issue might be overblown, because if you are a producer, leaks mean money literally going into thin air. There’s a high incentive to fix leaks. Abandoned oil and gas wells, cited in the study, would of course be an exception.

The other reason is the IPCC, which produced this graph in the AR5 draft showing that methane just isn’t cooperating with models, and measurements are out of bounds with projections. Methane just doesn't seem to be much of a problem: 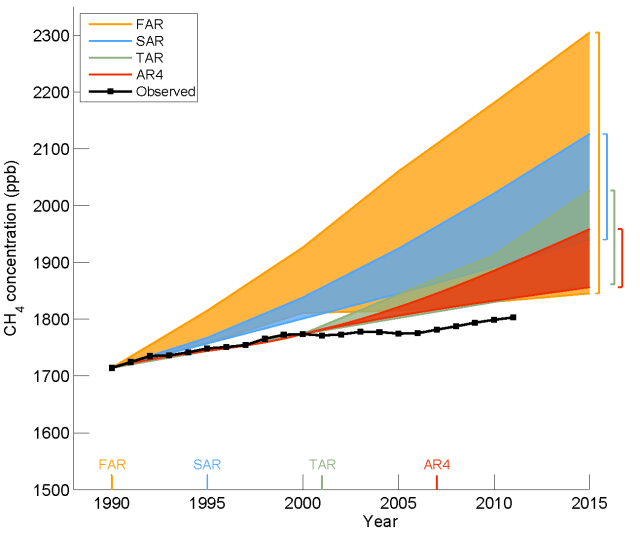 Methane is estimated to be about 30 x more powerful than CO2 as a greenhouse gas (although that is an approximation, because methane and CO2 absorb infrared in different wavelengths and are not directly comparable), so that apparently miniscule concentrations can make for a change.  Note though, that despite a rapid  growth in natural gas production, the concentration in the atmosphere is rising relatively slowly.  The approximately 50 ppb increase in methand from 2000 to 2012 would translate to an increase in CO2 of 1.5 ppm CO2, approximately the same as one year of CO2 increase. 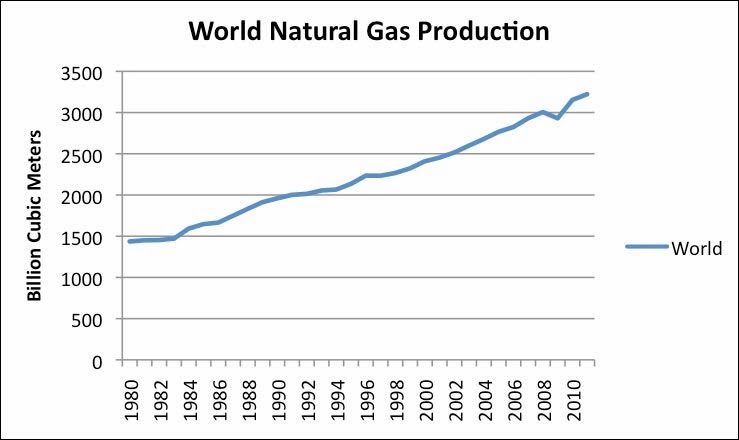 Remember this the next time some anti-fracking freak cites methane emissions as his/her excuse for opposing a United State energy program relying on natural gas from fracking.


A new study published in the journal Science says that the total impact of switching to natural gas depends heavily on leakage of methane (CH4) during the natural gas life cycle, and suggests that more can be done to reduce methane emissions and to improve measurement tools which help inform policy choices.

Published in the February 14 issue of Science, the study, “Methane Leaks from North American Natural Gas Systems,” presents a first effort to systematically compare North American emissions estimates at scales ranging from device-level to continental atmospheric studies. Because natural gas emits less carbon dioxide during combustion than other fossil fuels, it has been looked to as a ‘bridge’ fuel to a lower carbon energy system.

“With this study and our larger body of work focusing on natural gas and our transforming energy economy, we offer policymakers and investors a solid analytical foundation for decision making,” said Doug Arent, executive director of the Joint Institute for Strategic Energy Analysis (JISEA) and a co-author to the study. “While we found that official inventories tend to under-estimate total methane leakage, leakage rates are unlikely to be high enough to undermine the climate benefits of gas versus coal.”