Can Wood Chips Save The Bay?

Probably not, but they may go a surprisingly long way towards that goal.

Bioreactor chips away at nitrogen running off farm fields 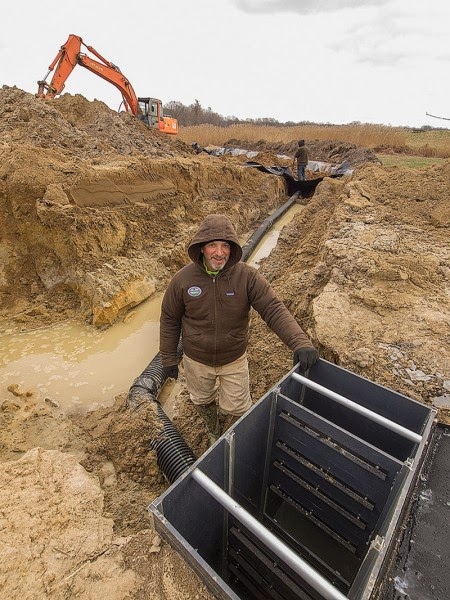 Several farmers in the Chesapeake Bay region are testing a new conservation practice that can reduce nitrogen coming off farm fields’ drainage systems.

The practice is called a bioreactor. Instead of surface water from the fields collecting in a drain or ditch and discharging to streams and rivers, the collected water flows through a pipe that takes it to a buried trench filled with wood chips. The wood chips are a substrate for bacteria that digest the nitrogen. Then, the denitrified water continues flowing out the other side of the wood chip “box.” Thus, what ultimately runs off the farm fields has much less nitrogen in it.

The technology is designed to mimic the natural processes found in a small stream where vegetation and small organisms take up nitrogen in the water and then send cleaner water downstream. It also mimics some of the denitrification technologies used at sewage treatment plants and at digesters on dairy farms.

Research on the practice in the Midwest showed that bioreactors reduce the nitrogen flowing into waterways 30–50 percent in an average rainfall year. With the Chesapeake Bay watershed states under pressure to reduce pollution loads from agriculture, officials said the bioreactor could become a standard practice.

The use of bulk wood and wood chips to denitirify waste water is pretty well established; I don't see any substantial scientific objection.  The substrate is cheap , essentially a waste product, and the construction of the reactors is relatively simple and cheap (basically a porous bin with a heap of wood chips). There are always technical problems (just how long does a pile of chips last, and how often do you have to rebuild the "reactor"?), but those would seem amenable to simple experimentation.

I strongly urge the Chesapeake Bay Foundation and the other various NGOs who claim to care about the Bay to drop their lobbying efforts, and put all their donated money into installing these on all agricultural drainage water.