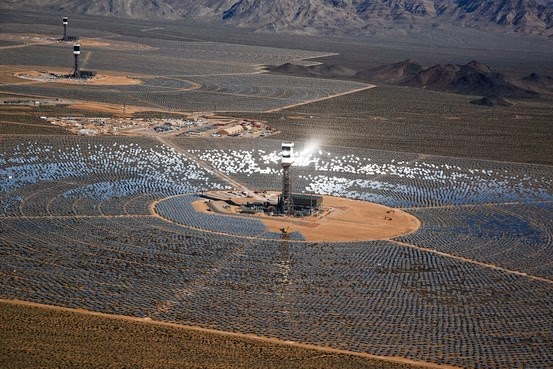 
A giant solar-power project officially opening this week in the California desert is the first of its kind, and may be among the last, in part because of growing evidence that the technology it uses is killing birds.

The $2.2 billion solar farm, which spans over five square miles of federal land southwest of Las Vegas, includes three towers as tall as 40-story buildings. Nearly 350,000 mirrors, each the size of a garage door, reflect sunlight onto boilers atop the towers, creating steam that drives power generators.


BrightSource wants to build a second tower-based solar farm in California's Riverside County, east of Palm Springs. But the state Energy Commission in December proposed that the company instead use more conventional technologies, such as solar panels or mirrored troughs.

One reason: the BrightSource system appears to be scorching birds that fly through the intense heat surrounding the towers, which can reach 1,000 degrees Fahrenheit.

The company, which is based in Oakland, Calif., reported finding dozens of dead birds at the Ivanpah plant over the past several months, while workers were testing the plant before it started operating in December. Some of the dead birds appeared to have singed or burned feathers, according to federal biologists and documents filed with the state Energy Commission.

Regulators said they anticipated that some birds would be killed once the Ivanpah plant started operating, but that they didn't expect so many to die during the plant's construction and testing. The dead birds included a peregrine falcon, a grebe, two hawks, four nighthawks and a variety of warblers and sparrows. State and federal regulators are overseeing a two-year study of the facility's effects on birds.

When it comes to energy, you can't make an omelette with out breaking eggs on a massive scale.