Obamacare Schadenfreude Waiting on the Storm

Another cold, sunny day here, at least so far.  We're scheduled for another Alberta Clipper "Rex" sometime late today, with the possibility of snow, followed by rain.  Oh Lovely!

Obamacare Schadenfreude?  A bit.  Word from Hawaii, Obama's original home, that signing up 3,600 people cost over $50,000 each.


How much does it cost taxpayers to sign up one ObamaCare enrollee? In President Obama's home state of Hawaii, it's $56,819.

The Obama administration gave Hawaii $205 million in grants over the past three years to set up its state-run exchange. But so far, only 3,614 Hawaiians have filled out applications — just 40% of the state's enrollment goal.

Hawaii's low sign-up numbers have state officials scrambling to figure out what to do next year, when its exchange is supposed to rely on excise taxes charged to insurers selling through the Hawaii Health Connector.

Ironically, the city where Obama signed ObamaCare into law is just 12% toward its enrollment goal, the second worst rate in the country.

Shockingly, I know, Washington D.C. is very nearly as bad.  Even Oregon and Maryland, with the two worst websites are doing substantially better.  But it's only (tax) money, right! 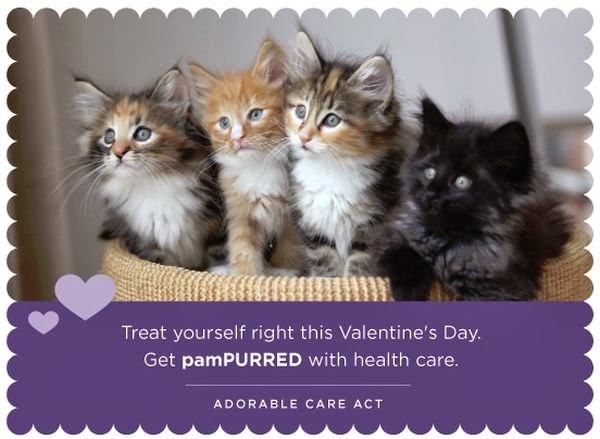 Such a deal!  But have no fear, that problem will be over, now that we're using cute kittens and polar bears to sell Obamacare!


Cat lovers across the country are expressing their displeasure with the administration’s use of kittens in an advertisement to promote Obamacare signups.
The offending image, found on the website “The Adorable Care Act,” shows four adorable kittens in a supposed Valentine’s Day greeting with the caption: “Treat yourself right this Valentines Day. Get pamPURRED with health care.”
Henrietta Fourpaws of Felix, IL, made the point that the ad was stupid, but also claimed that exploiting young kittens in this fashion was cruel and unjust. 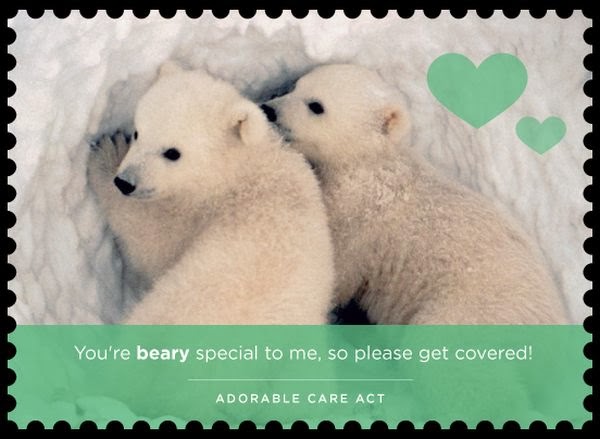 “Just look at their faces,” she said. “They’re bored and unhappy. Wouldn’t you be if you were forced to shill for a total disaster? It’s like putting them in the front seat of an Edsel.”

Gladys Purrdy of Morris, PA, was even more forceful in her denunciation of the ad. “How dare they use such beautiful creatures for a grubby enterprise like Obamacare,” she said. She added, “Besides, the kittens make poor sales critters for Obamacare. Everyone knows that cats are way too independent to obey the individual mandate, plus, they’re far too smart to believe the president after he told us ‘If you like your vet, you can keep your vet. Period.’”

Satire aside, the insulting reason for using cute little animals is that the White House thinks young women will fall all over themselves to sign up if the cute little critters are used as bait. . .

I guess even getting the crazy cat lady on your side is important.

For some patients, the Affordable Care Act Obamacare has rendered treatment unafforable:

..."So it could be that a MS patient could be expected to pay $62,000 just for one medication," says Dr. Daniel Kantor, who treats MS patients and others with neurological conditions near Jacksonville, Florida. "That’s a possiblity under the new ObamaCare going on right now."...

Americans for Prosperity, is running an ad on exactly this subject, featuring a woman with lupus, an auto-immune disease.  She starts by saying, "I voted for Barack Obama for president. I thought ObamaCare was going to be a good thing."

But Emilie Lamb says she later got a letter saying her insurance was canceled because of ObamaCare, pushing her premiums from $52 to $373 a month.

One of the problems is that drugs for some diseases such as MS do not have generic versions. So without cheaper alternatives and no help from ObamaCare, patients could face huge personal out-of-pocket bills, forcing some to skimp on their medications.

I'm sure glad we got a chance to read the bill before it was passed...

But the New York Times is tired of hearing examples of the bad effects of Obamacare on real people:

In the Republican response to the State of the Union address, Representative Cathy McMorris Rodgers of Washington lamented the travails of “Bette in Spokane,” whose insurance policy had been canceled because of the health care law and who faced huge premium increases to replace it.

The reality for Bette Grenier of Chattaroy, Wash., was more complicated.

She did dash off an angry letter to Ms. McMorris Rodgers, her congresswoman, in September, but on further exploration Ms. Grenier’s options were wider than she had thought. She qualified for a subsidized insurance plan through the health care law, an option she opposed philosophically. Instead, she bought insurance through a Christian ministry that is cheaper and better than her canceled policy. Since her star turn, she has been harassed and mocked by “some pretty mean people,” she said.

I get it. The NYT would apparently like conservatives to stop using real examples because in response, the liberals at the Times are forced to attack and mock them.

Some Republicans continue to insist that Preznit Obama is violating the consititution, but are powerless to do anything about it:


Washington Republicans on Sunday restated their argument that President Obama has violated the Constitution by using executive orders to alter the Affordable Care Act but acknowledged they likely have no recourse or ability to stop another incident.

“The president knows this is wrong.” - Sen. Mike Lee
However, he said critics would be challenged to win in court because Congress lacks the so-called “legal standing” to present the case and they would have a “tough time” finding somebody hurt enough by the delays to be a good plaintiff.

“The president knows this is wrong,” said Lee, among the most outspoken ObamaCare critics. “What gives him the ability to rewrite the law?”

Others, however, pointed out that what comes around may go around: Obama’s executive actions can backfire on Democrats if GOP takes the White House


President Obama’s repeated use of executive powers to ease the rollout of his health care law could be setting the stage for Republicans to roll back the overhaul’s most controversial parts if they retake the White House in 2016, say analysts who have tracked the law’s shifting landscape.

The president has tweaked or delayed Obamacare’s mandates on employers and individuals without Congress on multiple occasions, each in a bid to put out a political firestorm caused by the law’s rocky rollout.

Although he is taking advantage of discretion built into the Affordable Care Act of 2010, those executive powers also would give “a future President Rand [Paul] or other ACA opponent room to throw a monkey wrench into the works and help try to dismantle the law from the inside,” said I. Glenn Cohen, a health policy analyst at Harvard Law School.
. . .
“The president is setting a very dangerous precedent, as are the congressional Democrats who condone it,” said Brendan Buck, a spokesman for House Speaker John A. Boehner, Ohio Republican.
. . .
“Are you going to say that [a Republican’s] action is unacceptable just because the intent is different?” he said. “The outcome is the same.”


I couldn’t help thinking this was the Worst. Week. Yet., staring once again at the slow-motion train wreck known officially as the Affordable Care Act implementation, or less charitably as the ♡bamaCare!!! Follies. So let us look back on the weary week that was, and then take a brief look ahead at the future of the law Officially So Settled It’s Inscribed in Solid Play-Doh.

I dunno about worst week ever, that's a pretty high bar.
Posted by Fritz at 2:05 PM