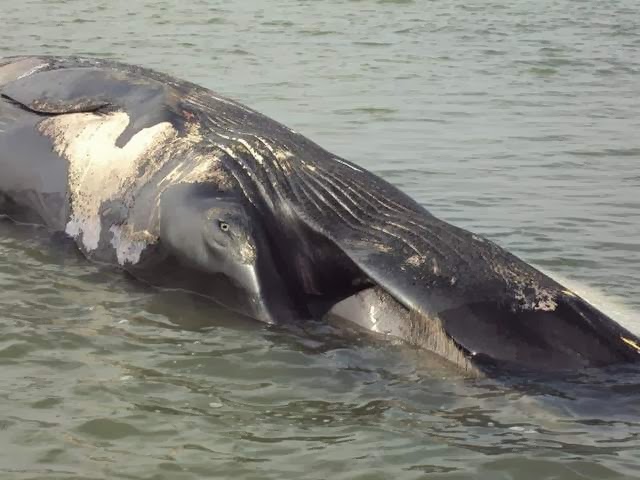 It was likely a fin or humpback whale that was found dead in a shallow-water area near the Maryland-Virginia state line in the Chesapeake Bay, an official said.

Rescue teams with the Virginia Aquarium Stranding Response Team hope to learn more about the 30-foot-long animal’s death from samples taken from its badly decomposed body.

Part of the difficulty with identifying it is the animal is partially submerged in shallow water, unlike whale strandings in which the animal is beached, so it is difficult to see its markings.

“They are hoping to talk with others and identify the whale,” said Joan Barns, a spokeswoman with the aquarium.

“They did take some samples that should give them a general idea of the health of the animal at the time of the stranding,” she said.

Actually, it turns out it's not that uncommon for whales to enter the lower Chesapeake Bay:


She said the whales generally found in the bay during cold-weather months are the fin and humpback, baleen whales that are sometimes spotted during winter wildlife boat trips, Barns said.

Even whales have to die sometimes of disease or old age, and there's not a lot in the world able to eat a whole whale quickly, so sometimes, whales just wash up dead for no apparent reason.  It stinks, but that's the way it goes.
Posted by Fritz at 7:15 PM