A few days ago, an NSF funded study came out which claimed to demonstrate that some 25% of Americans believed Astrology was a science.  I was prepared to grant that for purposes of argument (it's hard to lose by underestimating the ignorance of the masses; question, will Jimmy Fallon keep up the "Jay Walk" segments?).  However, I was prepared to hear a lot of "those stupid red staters" and "tea baggers."  Not a lot of that actually happened, and now I know why: 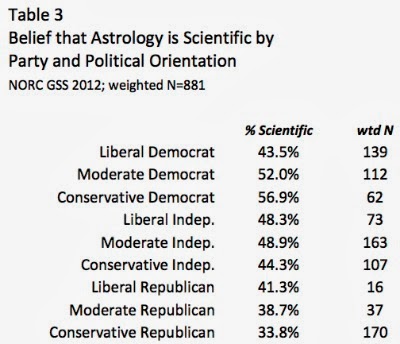 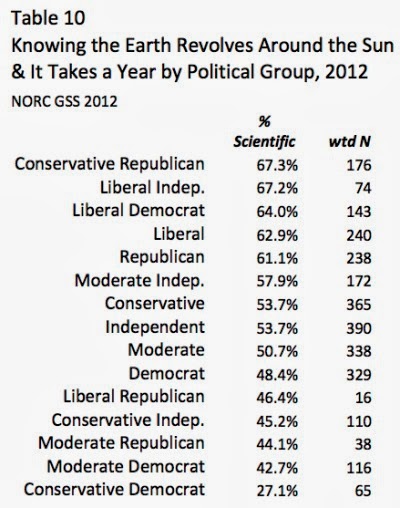 Interestingly the more extreme members of both parties (conservative Republicans and liberal Democrats) the more likely they are to know that the earth revolves around the Sun.   Possibly, actually taking the time to think about your beliefs long and hard enough to be in the fringes of your belief system requires an inquiring mind.

Still, there's an unhealthy amount of ignorance of simple physics on all sides. It's a true indictment of the educational system.  And it may be that education now is worse than it used to be, since the younger a person is, the more likely they are to believe in Astrology: 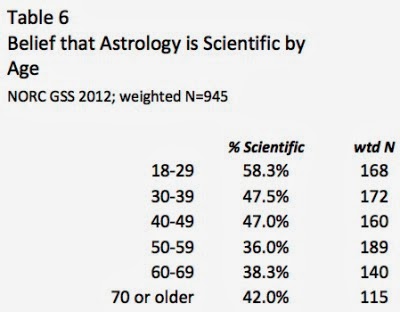 On the other hand, it would be nice to believe we continued to learn more as we got older. Then there would be some value in it, after all.
Posted by Fritz at 7:28 PM