We're between storms here today.  It's cold, but getting above freezing, and blue.  I have to leave soon, so this one will cover a lot of material fast...

My feelings are deeply hurt this morning; Ace informs me that Jim Geraghty of National Review Online has taken over my beat of listing and commenting on the daily damage done by Obamacare, complete with trainwreck gifs and all: Another Round of Obamacare Train Wrecks.

So how well did he do?  Well I had 8 items yesterday, he had 6, some of which I had covered, some not (and at least one on deck for this morning)


Sheila Lawless is the office manager at a small rheumatology practice in Wichita Falls, Texas, about two hours outside of Dallas. She makes sure everything in the office runs smoothly — scheduling patients, collecting payments, keeping the lights on. Recently she added another duty — incorporating the trickle of patients with insurance plans purchased on the new Affordable Care Act exchanges.
. . . It’s presented a major challenge: verifying that these patients have insurance. Each exchange patient has required the practice to spend an hour or more on the phone with the insurance company. “We’ve been on hold for an hour, an hour and 20, an hour and 45, been disconnected, have to call back again and repeat the process,” she explains. Those sorts of hold times add up fast.


In Illinois, workers’ hours are dropping dramatically — almost as if a new law had given employers a major incentive to have employees working less than 30 hours a week!


In fact, average work hours increased slightly in two of these sectors between 2008 and 2010. But all three sectors (retail trade, food and beverage, and general merchandise) saw dramatic reductions in average work hours after ObamaCare was enacted.

That one has moss on it, as does: Maryland looks on in envy at a barely used state exchange that generally works:

He does find some new details  article about Oregon's website debacle:


But perhaps Maryland’s mess looks good compared to Oregon, where the accusations of lying are piling up:


Carolyn Lawson, the IT expert who tried and failed to build Oregon’s online insurance exchange, complained to an Oregon Health Authority official that she was forced to leave under false pretenses in an email uncovered by the On Your Side Investigators. . .

This one is so old its moss has moss:


Sure, most Americans say the law hasn’t affected their lives yet. But among those who have, more say the impact is negative:


While most Americans (54 percent) continue to say they haven’t been impacted by the law one way or another, the share saying they’ve been negatively affected has inched up in recent months (29 percent in February, up from 23 percent last October) and continues to outpace the share saying they’ve personally benefited from the law (17 percent). . .

And this one was on deck for this morning:


And evidence continues to mount that the uninsured have a remarkably resilient capacity to tune out news, information, and details of a massive, complicated piece of legislation that overhauled the entire health-care system in the name of helping them get insurance:


The vast majority of uninsured Americans do not know they must sign up for health insurance by March 31 or pay a fine, according to a new poll. . .


Now that Karen Willmus can get health insurance through Obamacare, she plans to quit teaching 9th grade English at the end of the school year.

The 51-year-old found policies on the Colorado state exchange for about $300 a month. That's less than what she's paying now for employer-sponsored coverage and less than half what she paid on the individual market in 2007.

Like Willmus, millions of people could quit their jobs or cut back on their hours in coming years because of Obamacare, according to a recent report from the Congressional Budget Office. . .
. . .
Instead of eating bonbons on her couch, Willmus plans to start her own business with her teen daughter publishing materials for non-native English speakers and others looking to improve their literacy. She expects to work even more than she does now and hire two or three people.

"I can't afford to go out and buy insurance while trying to start a business," said Willmus, of Colorado Springs, Colo. "Obamacare will allow me to be more comfortable at risking what I own."

If wishes were horses, beggars would ride...

Speaking of beggers, it turns out the vast mass of uninsured haven't been reading my blog, or doing much to get any information: 76% of Uninsured Unaware of ObamaCare Sign-Up Deadline


It’s quite obvious the overwhelming majority of Americans have tuned out the lame-duck president and his minions. They’ve spent hundreds of millions of dollars trying to force people into their socialized medicine scheme and people just refuse to participate, despite the phony numbers of people they’ve claimed have signed up.


The vast majority of uninsured Americans do not know they must sign up for health insurance by March 31 or pay a fine, according to a new poll.
The Kaiser Family Foundation (KFF), in its monthly tracking survey, found that 76 percent of the uninsured are not aware of the looming sign-up deadline. Only 24 percent could name the date correctly.


Some TurboTax customers are mad at Intuit, maker of the popular tax-prep software, because they've finished their returns but are unable to file. Their anger is misplaced. They should blame the Internal Revenue Service, along with the 111th Congress and President Obama for enacting and signing the tax increase with which TurboTax can't yet comply. (They could also blame George W. Bush if they're in a jocose frame of mind.)

At issue is ObamaCare's new 3.8% "net investment income tax." It took effect Jan. 1, 2013, so that taxpayers are encountering it just now as they prepare their returns for last year. In effect, it applies the Medicare payroll tax to interest, dividends and capital gains.

With "4 million" signups (most of which are medicaid, and people who signed up for Obmacare after Obamacare forced them off their own plans) out of "7 million" needed for success, and just a month to go before the March 31 deadline:  Pace of Obamacare sign-ups is slowing in February

But the Tuesday claim of 4 million sign-ups represents a smaller 700,000 gain from the 3.3 million total the administration reported as of Feb. 1.

Last year, before the law's exchanges had opened, an HHS memo had projected about 200,000 more individuals would sign up in the month than in January. That memo estimated nearly 1.3 million sign-ups in February -- or nearly 600,000 more than HHS claims have signed up thus far.

The open enrollment period for health insurance extends through the end of March, and the administration is hoping for a late surge in sign-ups, especially among young and healthy individuals. Before the botched rollout of the law's exchanges, the administration had defined success as 7 million total sign-ups.

Can Obamacare Avoid a Consumer Rebellion? Apparently not...


When Obamacare handed insurance companies millions of compulsory customers, it also handed them a reminder of one of their industry's toughest realities: Consumers want low premiums, and they want to see any doctor they want. And it's impossible to give them both.

But "if you like your doctor, you can hope she's in our network" was always going to be a tough sell for insurers. With the insurance market now viewed through the distorted lens of the endless partisan fight over Obamacare, it's going to be harder than ever. Republicans have pounced on the narrow networks, citing them as further proof that President Obama lied when he said the Affordable Care Act would not cost people their doctors.

And as the volume of enrollees and rhetoric rises, insurers are worried about a possible backlash. Narrow networks are getting a bad reputation, and consumers may demand more choices.

Brutal: Obama vs. reality on Obamacare costs for small businesses

Via the Libre Initiative, here’s America’s Liar of the Year (not my words!) doing his thing in October of 2009. In a speech peddling Obamacare to small business advocates, the president warmed up with his shattered “keep your plan” vow before enthusiastically touting the glorious ‘affordability’ that awaited exchange participants:


“What we will do is make the coverage that you’re currently providing more affordable…You’ll be able to get better deals than you could have ever received on your own. In fact, small businesses that choose one of the plans in this exchange could save 25 percent on their premiums by 2016.”

The operation of said magical exchange, by the way, was just delayed for the second time, for another full year — with many small businesses being offered a single “option.” And now, 2014′s reality check, via — er – the Obama administration:


Nearly two-thirds of small businesses that currently offer health insurance to their workers will pay more for coverage as a result of new rules in the health care law, as will millions of small-business employees and their family members, according to new estimates released by the Obama administration…”We are estimating that 65 percent of the small firms are expected to experience increases in their premium rates while the remaining 35 percent are anticipated to have rate reductions,” CMS’ Office of the Actuary wrote in a new report.

These looming rate increases will compel many employers in the small group market (whose businesses fall below the employee thresholds established in the again-postponed employer mandate) to simply drop coverage for their workers. Experts — including those within the administration — have projected that tens of millions of American workers will ultimately lose their existing employer-based coverage due to Obamacare. Those employees will be shuffled into the individual market, where many will choose between paying significantly more for health insurance and forking over mandate-tax penalty payments to the IRS for the privilege of being uninsured. You’ll recall that White House officials have repeatedly assured consumers within the employer-based market that the recent furor over canceled plans “doesn’t apply” to them. ”They don’t have to worry about, or do, or change anything,” Jay Carney told reporters in late October. According to the administration’s own numbers, that’s not even close to being accurate. This crew simply lies about Obamacare. Period.

But not too worry,  All the horror stories about Obamacare are lies, says Harry Reid:


"Despite all that good news, there's plenty of horror stories being told. All of them are untrue, but they're being told all over America," said Reid. 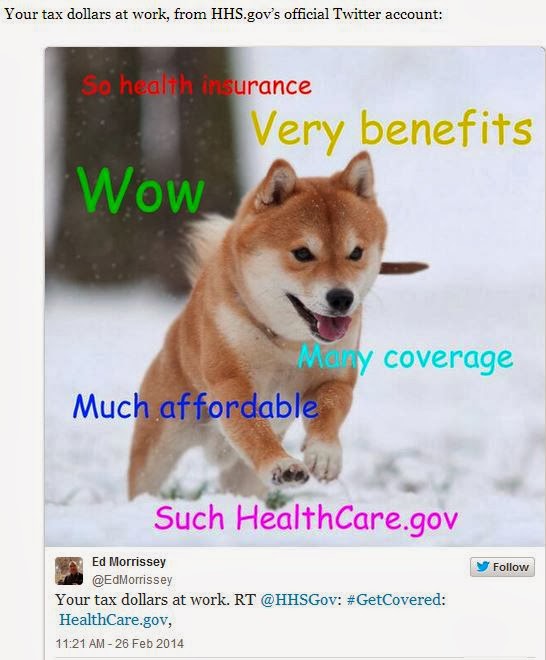 So that's eight additional fresh Schadenfreude's compared to Geraghty's three or so (depending on how you count).  Advantage, Fritz!
Posted by Fritz at 9:59 AM