Were Denisovans the Original Sluts and Bad Boys? 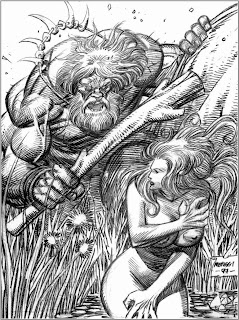 
The ancient genomes, one from a Neanderthal and one from a different archaic human group, the Denisovans, were presented on 18 November at a meeting at the Royal Society in London. They suggest that interbreeding went on between the members of several ancient human-like groups living in Europe and Asia more than 30,000 years ago, including an as-yet unknown human ancestor from Asia.

“What it begins to suggest is that we’re looking at a ‘Lord of the Rings’-type world — that there were many hominid populations,” says Mark Thomas, an evolutionary geneticist at University College London who was at the meeting but was not involved in the work. 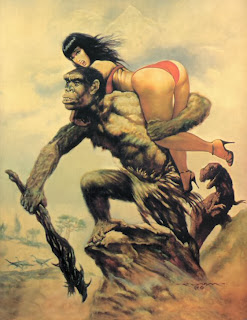 'Lord of the Rings'-type world'; I like that analogy.  We could start naming the various species of Homo and near Homo using Lord of the Rings inhabitants.  We already have the hobbit out on an island near Sumatra, name the Neanderthals after the Tolkien dwarves, as they seem to share a similar rugged physiognomy, make Homo heidelbergensis into Orcs etc. It's not much sillier than naming the planets after Roman gods.

The new Denisovan genome indicates that this enigmatic population got around: Reich said at the meeting that they interbred with Neanderthals and with the ancestors of human populations that now live in China and other parts of East Asia, in addition to Oceanic populations, as his team previously reported. Most surprisingly, Reich said, the new genomes indicate that Denisovans interbred with another extinct population of archaic humans that lived in Asia more than 30,000 years ago, which is neither human nor Neanderthal. 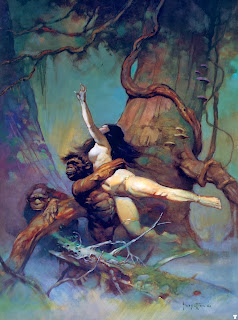 Perhaps the Denisovans had relatively loose morals compared to the other hominid species at the time.  There is primate precedent for species showing different amounts of sexual behavior.  Bonobos, the close relative of Chimpanzees, have very high levels of promiscuous behavior.

The meeting was abuzz with conjecture about the identity of this potentially new population of humans. “We don’t have the faintest idea,” says Chris Stringer, a paleoanthropologist at the London Natural History Museum, who was not involved in the work. He speculates that the population could be related to Homo heidelbergensis, a species that left Africa around half a million years ago and later gave rise to Neanderthals in Europe. “Perhaps it lived on in Asia as well,” Stringer says.

Maybe Denisovan girls were cute by the standards of Neanderthals, and whatever  other hominids were around, and were often stolen away by marauding bands.  That's my working theory for now.  And since about all we have from the Denisovans is a couple of teeth, a finger and toe bone, it's hard to prove me wrong.

Over at The Other McCain, Wombat-Socho has posted the weekly master list  "Rule 5 Sunday: Quiet Splendor."
Posted by Fritz at 8:19 PM