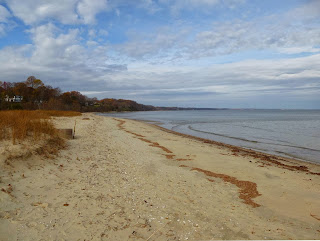 Two days worth of beach walking, combined.  Two nice days, Friday a little warmer than Saturday, 60ish instead of 50ish, but both partly sunny, breezy without being too windy.  And good low tides. 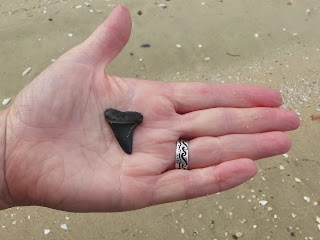 Friday was a remarkable day for shark's teeth.  We walked well up past Matoaka Cottages and back, and found 55 teeth, including this gloating grade Mako Shark's tooth that Georgia found. 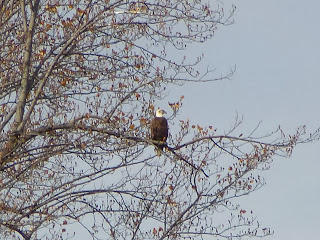 The Eagles were out and about, but not in great numbers.  I wonder if some of the juveniles have moved out, either south for the winter, or off to found territories of their own. 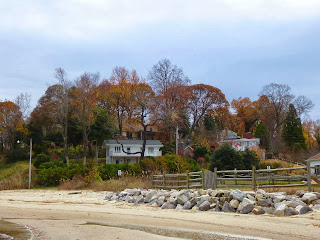 I just liked the colors in this shot of houses at Calvert Beach. 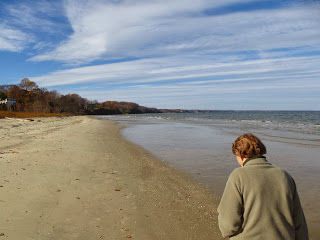 As I said, today was a bit cooler, but still a very good day.  I hear the weather is expected to get cold soon, so it's good that we got out to take advantage of it. 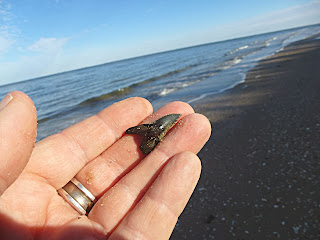 Despite an even lower tide, the tooth hunting was not at good as yesterday; it seemed the sand covered more of the shell hash that holds the teeth.  But we still managed 17 including this top para symphyseal (near center)  tooth from a Snaggletooth; one of the nicest I've seen, if I must say so myself. 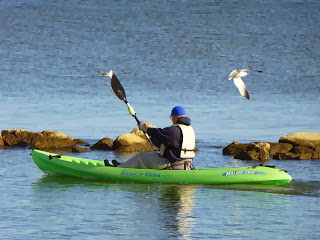 A kayaker disturbs some of the gulls on the south jetty. 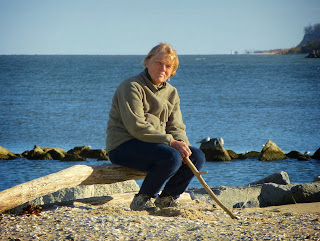 Georgia sits for a rare portrait.