The Catfish That May Eat Chesapeake Bay 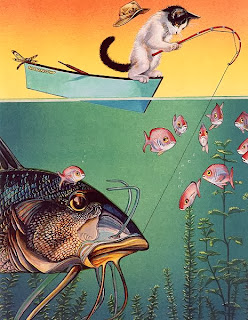 A new study confirms that nonnative blue catfish around the Chesapeake have the potential to take a significant bite out of populations of important native species such as blue crabs and river herring.

The study examined the diets of blue catfish in portions of several Virginia tributaries and concluded they “may contribute to substantial losses of key fishery resources.”

Those losses could be “ecologically significant” for some species such as blueback herring, whose populations are already at low levels, the study concluded. 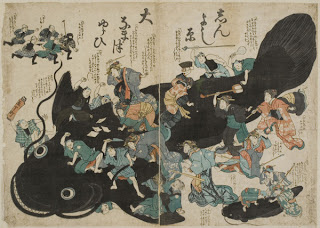 Note the weasel words "could be."


It also said blue catfish predation could have a greater impact on abundant species, such as blue crabs and menhaden, than previously thought. In part, that is because blue catfish are turning up in higher salinity water than expected.

“To me, the most surprising finding from our study was the extent to which we documented predators much farther downstream in the James — down to the Chesapeake Bay estuary proper,” said Greg Garman, director of the Virginia Commonwealth University Center for Environmental Studies and lead author of the study. “We wouldn’t have expected that.” 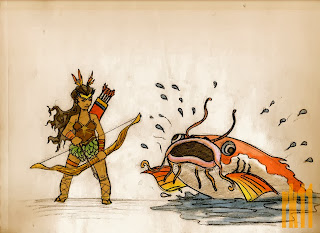 Blue catfish, which in rare cases can reach 100 pounds, can dominate rivers where they are introduced. In the James River near Hopewell, for instance, scientists estimate they account for 50–70 percent of all fish biomass. Scientists and fishery managers are worried that could mean trouble for native species if they are eaten in large numbers by blue catfish.

The new study examined 1,002 blue catfish 15 inches or longer that were taken from the Rappahannock and James rivers during the fall of 2011 and spring of 2012. They found that blue catfish ate a wide variety of species, including many of management concern such as blue crabs, blueback herring, American shad, softshell clams, menhaden and white perch. 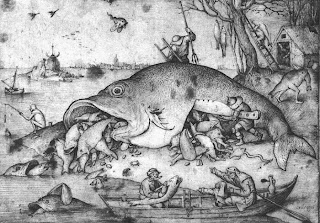 Yes, big fish eat smaller fish, and if you take the known (or suspected)  biomass of any big predator, and multiply it by the might they might eat, you get a pretty big number:

Based on those results, the researchers estimated what the potential predation by blue catfish might have been during spring 2012 in two specific locations.

In Burwell Bay, a small area of the James River not far upstream from Newport News, they estimated blue catfish had the potential to consume 560,000–720,000 blue crabs. For perspective, that would be nearly 1 percent of the 765 million blue crabs estimated to be in the Bay in early 2012 by the annual Blue Crab Winter Dredge Survey.

Note the weasel words "potential predation." It's more likely they ate equal amounts of small baitfish that nobody outside the business know the name of, and turned them into nice, white, blue catfish flesh.

In that same area, the study estimated blue catfish may have consumed 670,000–820,000 Atlantic menhaden and 1.9 million–3.1 million softshell clams.

Farther upstream, near Manchester, they estimated that blue catfish might have consumed 8,000–10,000 blueback herring — a once-abundant species whose East Coast population is at a record low — and 14,000–18,000 white perch.

As you may know, I have a friend who takes people on guided trips to catch giant Blue Catfish in the Potomac River (and another who is threatening to). Since there is no reasonable chance of eliminating the Blue Cats from the system, we must accept that they will continue to flourish in the system, and expand their range until they reach some natural boundary.  The best, and possibly only, way to control the Blue Cats in the Bay region will be to find a market for them, and encourage a commercial and recreational fishery for them.

As I've always said, if you wanted to make a fish in Maryland disappear, find a market for them, and given commercial fisherman a short season to catch with heavy gear restriction, and a big minimum size. That will give them a number of  motivations to get as many as possible.
Posted by Fritz at 6:10 PM