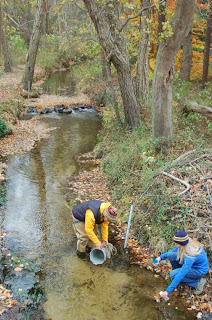 A team of scientists has received federal funding to study for the next five years just how much of an effect current best management practices have on water quality.

Based at the Horn Point Laboratory in Cambridge, part of the University of Maryland’s Center for Environmental Science, the scientists’ study is funded by a grant from the National Science Foundation in Washington, D.C. Also receiving grant money for the study were the University of Maryland Extension and Winrock International, a Washington, D.C.-based nonprofit that works on climate and environmental issues.

The study officially began Oct. 1, and aims to figure out if best management practices for farmers and residents, recommended by the Environmental Protection Agency, are making any progress toward reducing nutrients and sediments in the local water sources that ultimately lead to the Chesapeake Bay.
...
The scientists think if many more best management practices are implemented in the watersheds, the data should show improved water quality. In that case, Caroline County would be used as a model to make recommendations for other areas.

If no positive effects on nutrients and sediment are detected, the group will show the results to the EPA and suggest it try another approach.

“The EPA may or may not like this,” said chief scientist Tom Fisher, a professor at Horn Point, “but we are at the University of Maryland, funded by the National Science Foundation, and are independent of the EPA.”

EPA should have checked the assumptions before they made them mandatory, but that's not how they roll.

I'm a little shocked to see Tom Fisher tweaking EPA's beard like this.  I can practically guarantee that some scientists, probably more than one, are receiving EPA funding at this moment.  Would EPA cut funding for one project because they may not like the fact that another professor at the same institution is questioning their mandates?  Would the IRS hinder tax exemptions of political opponents of the administration?  Would the Census Bureau inflate unemployment numbers in advance of a national election?  Five years ago, I would probably have said no.
Posted by Fritz at 4:50 PM