USGS scientists have determined that high-salinity groundwater found more than 1,000 meters (0.6 mi.) deep under the Chesapeake Bay is actually remnant water from the Early Cretaceous North Atlantic Sea and is probably 100-145 million years old. This is the oldest sizeable body of seawater to be identified worldwide. 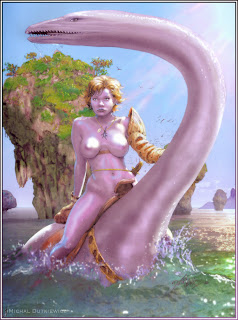 The Cretaceous Period, of course, is the era of the dinosaurs, and what good is a story about the dinosaur era without dinobabes to illustrate it?

Twice as salty as modern seawater, the ancient seawater was preserved like a prehistoric fly in amber, partly by the aid of the impact of a massive comet or meteorite that struck the area about 35 million years ago, creating Chesapeake Bay.

Interestingly, the salinity of the oceans, in the long run, is controlled  by evaporation, and formation of salts in great dry basins. 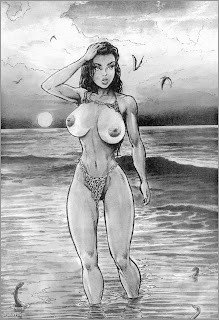 For example, much of the Mediterranean Sea is underlain by massive salt deposits left when the Med dried up during a period when it was cut off from the world ocean much like the Great Salt Lake is now.  The global ocean goes through large changes in average salinity, though over relatively long time periods.  Similar deposits around the world speaks to how common the process is geologically

"Previous evidence for temperature and salinity levels of geologic-era oceans around the globe have been estimated indirectly from various types of evidence in deep sediment cores," said Ward Sanford, a USGS research hydrologist and lead author of the investigation. "In contrast, our study identifies ancient seawater that remains in place in its geologic setting, enabling us to provide a direct estimate of its age and salinity." 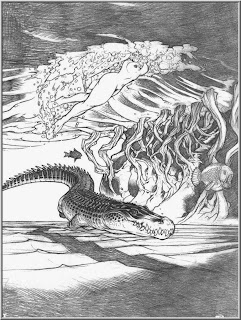 It is not inaccurate to say that the meteorite strike where the mouth of the Bay is today created the Bay as we know it.  The huge crate it blasted caused the rivers that would flow from the Appalachians to the coast to drain into the depression left.  It probably also destroyed most of the life on the east coast of North America.

The largest crater discovered in the United States, the Chesapeake Bay impact crater is one of only a few oceanic impact craters that have been documented worldwide.

About 35 million years ago a huge rock or chunk of ice traveling through space blasted a 56-mile-wide hole in the shallow ocean floor near what is now the mouth of the Chesapeake Bay. The force of the impact ejected enormous amounts of debris into the atmosphere and spawned a train of gigantic tsunamis that probably reached as far as the Blue Ridge Mountains, more than 110 miles away.

Wombat-Socho's grand compilation of Rule 5 posts,  "Rule 5 Monday: Palate Cleanser" is up at The Other McCain.
Posted by Fritz at 6:00 AM