Two men save shark from choking on moose 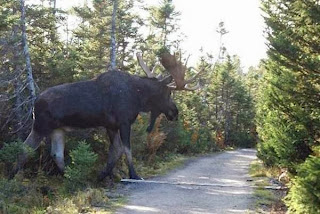 Derrick Chaulk was driving by the Norris Arm North harbor and thought he saw a beached whale. But when he went closer to investigate, Chaulk realized it was a Greenland shark.And it was choking.

Chaulk and another man, Jeremy Ball, started pulling on the moose, CBS.ca reported.

"A couple yanks and it just came right out," he said.

Chaulk and Ball then pushed the shark back into the water. After being still for a few minutes, water starting coming off the shark's gills and it headed back out to sea.

"It was a good feeling to see that shark swim out, knowing that you saved his life," Chaulk said. "There was a few people up on the bank watching and once that shark swam out and lifted his tail, and then swam all the way out, everybody just clapped."

Either that was the world's smallest moose, or something got lost in the translation from the original Cannuck. That said, Greenland shark's are one of the largest predatory sharks, and are known to occasionally pick off very large prey.
Posted by Fritz at 7:37 PM