That Would Get Your Attention! 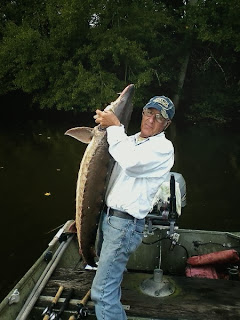 Atlantic sturgeon jumps out of nowhere into boat on MD creek

Two years ago, Bill Harris and his daughter were fishing on Marshyhope Creek on the Eastern Shore when suddenly, across the river, a large sturgeon jumped out of the water.

“‘That is a once in a lifetime experience!’” Harris exclaimed to his daughter, Susan. “We’ll never see another sturgeon.”

He was wrong. During fishing trips last year with his friend, Randy Rowland, the two retired U.S. Department of Agriculture scientists saw sturgeon after sturgeon. They counted nearly 50 jumping sturgeon during their weekly fall fish trips on the creek, a tributary to the Nanticoke River.

This year, they got an even closer look. On Sept. 20, Harris and Rowland were carp fishing when they saw a number of sturgeon jumping nearby. They edged nearer.

Suddenly, a 5.5-foot sturgeon leapt out of the river and into their 16-foot boat, landing between Harris, who was sitting in the back seat, and the motor. The big fish knocked a rod holder off the boat, sent a fishing rod into the water and brushed against Harris’ thigh. “It went ballistic,” recalled Harris, who leapt from his seat. “I was hoping he wouldn’t beat the bottom out of the boat.”

That could be a very painful experience, especially if a large sturgeon were to jump and land on a moving boat, at happens occasionally.


No one knows why large sturgeon leap from the water, but it’s been going on for centuries. During the Revolutionary War, a soldier was killed while rowing across the Potomac River when a sturgeon jumped out of the water and landed on him.

The bigger mystery is why there have been so many reports coming from the Nanticoke and Marshyhope in the last several years. Although large sturgeon are occasionally seen in Maryland waters, breeding populations are considered to be extirpated in the state.

One possibility: The Nanticoke was the scene of an experimental release in 1996 of more than 3,000 hatchery-reared sturgeon. Sturgeon are an anadromous fish that spend most of their lives off the Atlantic coast but return to their native river to spawn. Sturgeon are long-lived, slow-maturing fish that don’t begin to reproduce until they are about 15 years old.

So the timing is about right for some of those fish to return. Dave Secor, a fisheries scientist with the University of Maryland Center for Environmental Science who participated in the original Nanticoke release, said that the fish being reported — mostly in the 5–6 foot range — are “in the ballpark” of being the right size for 17-year-old sturgeon.

Yet he and others are uncertain the fish came from the 1996 release. Those sturgeon were the offspring of adult fish from the Hudson River that were produced at a U.S. Fish and Wildlife Service hatchery in Pennsylvania.

Not only were the fish not from anywhere near the Nanticoke, they were a year old when they went into the river. Biologists don’t know when young sturgeon “imprint” on their native river so they can find their way back as adults, but they think it’s before a year. Hatchery-reared shad imprint on a river within 45 days of hatching, said Brian Richardson, of the Maryland Department of Natural Resources.

“It does correspond with the stocking in 1996, as far as these fish coming back,” Richardson said. “But I would be very surprised if a sturgeon stocked at a year of age imprinted to the river.”

Secor said there are other possibilities. The large number of adult sturgeon being caught on the James River the last few years suggest that river might have had several strong years of reproduction about 15 years ago. Some of those returning fish might be finding their way into the Nanticoke.

“In the grand scheme of things, the Nanticoke isn’t that far from the James,” Stence noted.

It’s also possible, Secor said, that they actually are Nanticoke fish. The last egg-laden female found on breeding grounds in Maryland was in the Nanticoke River in 1972.

Although no breeding population is known, it’s possible a small number of fish survived unprotected, and successfully reproduced about 15 years ago, and their progeny are now returning to the river. After all, in the mid-1990s, most biologists didn’t think there were any sturgeon in the James River, either. “There could have been some type of cryptic reproduction we didn’t know about,” Secor said. “We can’t rule that out because obviously we didn’t think anything was going on in the James.”

I'm very surprised they can't answer this important question. It's hard to imagine they would have released sturgeon into the Nanticoke without having tagged them somehow.  Fish can be tagged with the electronic tags much like the "chips" you can have put into your pets or even your kids.  It would then be paramount to catch some of those returning fish and find out where they came from.