Now, at long last, the Virginia harvest is showing signs of a modest rebound after hitting an all-time low of 17,600 bushels in 1996. The most recent haul for the October 2012 to March 2013 season surpassed 405,000 bushels. It was the third straight increase, almost double the 2011-12 harvest, and the highest total in a quarter-century. Sarah Kliff NOV 19 States that opposed the law like the fix, but several states balk at the idea of extending non-compliant policies.

The growing Chesapeake Bay harvests in Virginia and Maryland are nowhere near the historic levels in the 1800s, or the middle of the last century. But the growth affirms the hopes of biologists in both states that the lowly bay oyster can manage a comeback.

Gov. Robert F. McDonnell took credit for Virginia’s better harvest. In a statement, he said the upswing is a result of his commitment to the oyster industry and the jobs it creates. 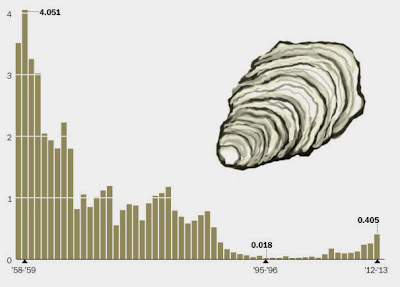 That pitiful little uptick on the right side is what they're so happy about.  The graph is truncated to avoid showing the early days of oystering in the late 19th and early 20th centuries when harvesting was much higher.  And it's not "oyster recovery," it's increased oyster aquaculture:

Virginia is bullish on aquaculture, leasing plots of riverbed or bay floor to oyster farmers for $1.50 an acre. About 100,000 acres of the state water bottom is leased for farming. Although the practice is a century old, large-scale farming, which has been going on for about a decade, provided a significant boost to oyster growth.

I reiterate my position; ban the harvesting of "wild" oysters for at least 5-10 years to find out if the Eastern Oyster is still a viable fishery in the Chesapeake Bay as it exists now.  Allow/encourage aquaculture up to the point that it begins to significantly impact the ecology of the Bay in significant ways, or impedes traffic.