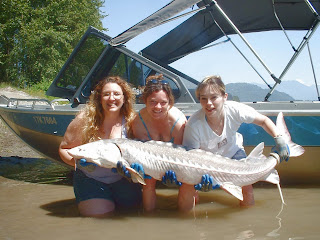 ...Balazik has been working at Virginia Commonwealth University’s Rice Center since 2007 to document James River sturgeon spawning in the autumn. Previously, it was thought that sturgeon spawned only in spring.

Now a post-doctoral fellow at the Rice Center, Balazik continues to amass evidence of the fall spawning run. This year, Balazik and his team have caught – and released – more than 160 sturgeons since early August when he started setting gill nets to catch them.

He usually fishes in a section of the Lower James 15–20 miles below Richmond, where water from the Bay meets freshwater from the upland watershed. Sturgeon are known to spawn in water that is just barely fresh. 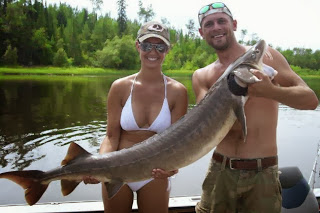 Except for one, very important fish.

On Sept. 6, Balazik’s nets caught a large female that was unmistakably gravid (full of eggs) and ready to spawn.

Balazik and several managers from the USF&WS examined the fish at the holding tank at Presquile Island before returning her to the James.

“That was a really big day,” Balazik said. “She was the first confirmed, pre-spawn female found in the tidal James since research commenced here in the late 1990s.”

This is good news; I'd like to see sturgeon return to the Bay in good numbers, although I'm sure it will take a very long time.
Posted by Fritz at 5:00 AM