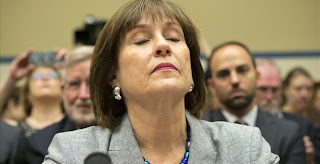 The public watchdog group Judicial Watch told Secrets Thursday that it was former scandal boss Lois Lerner who shared the information on groups including the American Future Fund and the American Issues Project.

The emails obtained by Judicial Watch show that the IRS, which was considering the tax status of the groups, gave the FEC the tax returns of the groups, including income, expenditures and staff pay. The emails also revealed the exact working of the prying political questions the IRS wanted the groups to reveal, such as their goals and the requests for brochures and ads.

The information, sent via email, to the FEC came in response to the organization’s questions about whether the IRS had granted tax-exempt status to the Tea Party groups. It is unclear how the information the IRS sent was going to help the FEC, since the IRS hadn’t determined the tax status of the groups yet.

The emails were produced to Judicial Watch last week by the FEC in response to an Aug. 9, 2013, Freedom of Information Act (FOIA) request.

As you may recall it was Lois Lerner who took the 5th Amendment upon being asked by Congress to testify about blocking of Tea Party tax exemptions, and leaks of confidential info to the FEC, giving a brief and controversial statement in which she declared herself innocent of all violations of law.  Many have argued that the statement itself constituted a waiver of her 5th Amendment rights, and think that she can be recalled by the committee and forced to testify.

Now that the have the good on her, they should just have the Justice Department file Federal felony charges on her (yeah, I know, no felonies on the left Holder), and she should be singing like a canary.

These charges are not the same as the ones that the IRS leaked tax returns of conservative groups including the National Organization of Marriage to the liberal group the Human Rights Campaign, in an attempt to bully donors.  These leaks have been traced to a staffer in Lois Lerner's Exempt Organizations Division in the IRS.

This woman has clearly acted as an agent of the Democratic Party while under employment by the IRS in high and sensitive position.  This kind of behavior need to be dealt with severely.

I reiterate my plan modest proposal: Affirmative action for conservatives within the federal bureaucracy.  Fire half of the current staff, randomly if necessary (it doesn't really matter who, they're all liberals anyway), and hire all selected conservatives.  That way the two groups can watch each other, and report on these kinds of illegal political activities from within the government.