A 7-year old Baltimore student suspended from school for chewing his pastry into the shape of a pistol.

...7-Year-Old Joshua was suspended this morning from Park Elementary School in Brooklyn Park. Joshua says he was eating a pastry during snack time and trying to shape it into a mountain, the teacher said it looked like a gun and took him to the principal's office. Joshua's parents were called, he has been suspended for two days. Joshua's father says it's ridiculous since no one was threatened or harmed by the pastry. A letter will be going home to all students of Park Elementary School this afternoon. School officials declined to comment due to privacy issues.

One suspects the teacher has other issues with the student, and was looking for some excuse, because, unless the kid has remarkable artistic ability, and insane control over his appetite, the resemblance to a pistol was rather faint.

I have a proposed solution.  The teacher and principal need a court mandated furlough to attend gun safety classes (at their own expense) to learn the difference between pop-tarts and pistols: 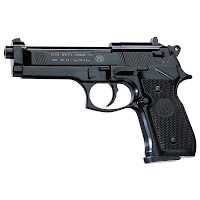