Reign of Pain: The Queen of Pain Edition

In their continual pursuit of showing that the budget increase slowdown known as the sequester is the worst thing to happen since the time the UN introduced cholera to Haiti as a side effect of earthquake relief, the democrats have begun to approach self parody, with Debby Wasserman Shultz claiming that the sequestration cuts were about to lead to malnutrition on the part of congressional aids (I assume she only worries about the democrats): 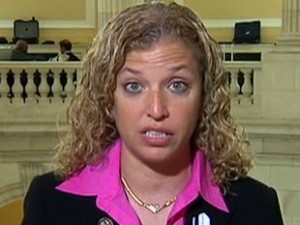 Restaurants on the House side of Congress are increasing in cost so much that aides are being “priced out” of a good meal, she said, as Fox News reported. The comments came by way of a discussion about the impacts of the sequester on lawmakers’ office budgets. Rep. Jim Moran said he may be forced to lay off a staffer — and then Ms. Wasserman Schultz weighed in with her tale of hard times.
...
Meanwhile, Ms. Wasserman Schultz’s staffers earn between $60,000 and $160,000 per year, Fox News reports.

However, Congress really is being asked to do less with less, and the sequester "cuts" really may cause some unemployment among congressional aids: 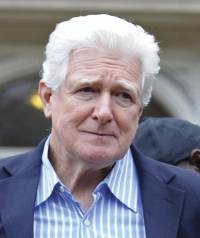 
Here's one reason why Democrats are in such a tizzy over the sequester spending cuts and ever-tighter budgets: It's affecting their personal staffs and budgets.

Two senior Democrats complained at a House Appropriations Committee hearing Tuesday that the combination of cuts over the past two years has robbed them of nearly 11 percent of their personal budgets, which average $1.3 million. Now House officials are looking at an additional 8.2 percent cut, or about $100,000. Total cut over three years: nearly 20 percent.

I much prefer cutting whole people to half people; it's so messy otherwise. 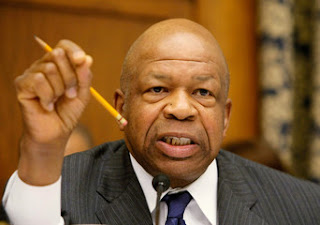 Then more bad news for congressional staffers and other federal employees who couldn't be bothered to pay their taxes; Congress considers a bill that would have them fired:


Citing figures indicating that more than 100,000 federal employees owe more than $1 billion in federal taxes, a House committee on Wednesday approved legislation that would require the firing of government workers who are “seriously tax delinquent.”

The legislation, introduced by Utah Rep. Jason Chaffetz, advanced through the House Oversight and Government Reform Committee. It now has to pass the full House to be implemented into law...

Democrats on the committee opposed the bill. Maryland Rep. Elijah Cummings, the ranking member on the committee, said the legislation “seeks to demonize federal employees rather than ensure their compliance with tax obligations.” 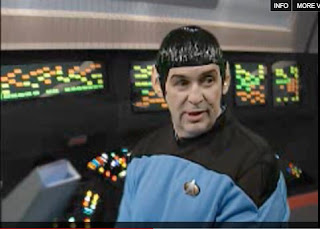 Taxes, they're just for the little people.  Speaking of taxes, and reasons for budgets to be cut, the boys and girls at the IRS got rebuked by the Congress when they got caught spending $60k making a Star-Trek themed video for "training" back in 2010.


...The agency says the video, along with a training video that parodied the TV show “Gilligan’s Island,” cost about $60,000. The “Star Trek” video accounted for most of the money, the agency said.

The IRS said Friday it was a mistake for employees to make the six-minute video. It was shown at the opening of a 2010 training and leadership conference but does not appear to have any training value.

The video features an elaborate set depicting the control room, or bridge, of the spaceship featured in the hit TV show. IRS workers portray the characters, including one who plays Mr. Spock, complete with fake hair and pointed ears.

The production value is high even though the acting is what one might expect from a bunch of tax collectors. In the video, the spaceship is approaching the planet “Notax,” where alien identity theft appears to be a problem...

The IRS acknowledged the violation of the 11th commandment (Don't Get Caught!).


The IRS said Friday it was a mistake for employees to make the six-minute video. It was shown at the opening of a 2010 training and leadership conference but does not appear to have any training value. 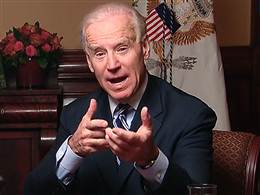 But that's just chump change compared to the Vice Preznit Biden's bill for a one-night stay at a 5 star mhotel in Paris:


As it turns out, Vice President Joe Biden's London stay in February was not the most expensive part of his trip. A government document released on February 14, 2013 shows that the contract for the Hotel Intercontinental Paris Le Grand came in at $585,000.50.

No word on how much of that was mini-bar charges.  I'm sure that some significant fraction of this was for the long suffering Social Security Secret Service detail which has to follow the doddering old man around.  Maybe we could save some bucks by having Joe guard his own door with his trusty double barreled shotgun.  Remember, Joe, when something moves, you shoot! 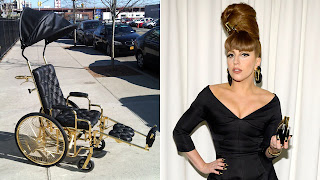 Speaking of pain, I heard that Lady Gaga was riding around in a 24 ct. gold wheel chair as a result of the hip joint infection that side-lined her recently.


Lady Gaga’s pal Terry Richardson posted a photo of Mother Monster earlier this week sitting in what looked like the world’s fanciest wheelchair.

Turns out it might well be exactly that: The whole thing is covered in 24-karat gold.

Gaga’s stylist contacted jewelry designer Ken Borochov and commissioned a gold-plated chair, giving him just a week’s notice to create it, according to the Daily Beast.

If it's true that you get less of something you tax, there needs to be more tax on stupid.
Posted by Fritz at 4:02 PM