...Results in death of common sense. 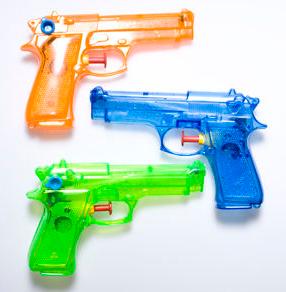 
Police were called to the Malden High School campus in Massachusetts after a squirt gun scare.

A teacher’s report of a gun sighting on the Malden High School campus prompted a quick police response Monday afternoon, though officers ultimately recovered only a “neon-colored” water gun at the scene.

While just a toy, fake guns are prohibited on-campus and can prompt a serious police response.

“A teacher reported hearing a clicking motion, and thought a student may have had a gun,” DeRuosi said when reached by phone Monday. “(Police) then found a water gun in the general vicinity.”

DeRuosi said new surveillance cameras installed as part of the school’s renovations last year will help identify the student who brought the toy to campus.

He added that administrators “have an idea of who the student may be.”

It's an epidemic of stupid.
Posted by Fritz at 5:00 AM