Freezing Britain was last night facing the unprecedented prospect of gas rationing.
A combination of bitterly cold weather and pipeline failures has left the energy grid at breaking point.

The country has less than 36 hours of gas reserves remaining and one energy expert warned yesterday that if the cold snap continues, rationing is ‘inevitable’.

If this happens, businesses and power stations will be restricted first, but then householders will be ordered to cut down on the amount of gas they use for heating their homes.


HEAVY snow is expected over the next 36 hours as Britain shivers on the coldest March weekend for 50 years.

Up to 16ins will fall over high ground with several inches likely across much of the UK, the Met Office said last night.

Over 1,000 schools were shut and transport was disrupted as any hopes of spring were dashed by yet another onslaught of snow and flooding today as temperatures fell as low as -12C (10F).

Back in 2000, some climatologist in the UK said that snow was going to be a thing of the past in jolly old England.  I suspect some are starting to wish it were so.

"One of the few uncontroversial conclusions of economics is that it is better to tax “bads” than “goods”. Wages and profits are desirable objectives, and governments have no good excuse for obstructing them. They are taxed largely for reasons of convenience, at the cost of disincentives to wage-earning and profitmaking that are a drag on the economy."

"Energy consumption, on the other hand, is not an objective for anyone. Indeed, the negative externalities of energy use, including local pollution and greenhouse gas emissions, mean that, other things being equal, an economy that burns less fuel is better off."

Which is just stupid. All things are not equal.   Look at the following graph of GDP versus energy use for different countries around the world, and decide which end of the line you want to be on... 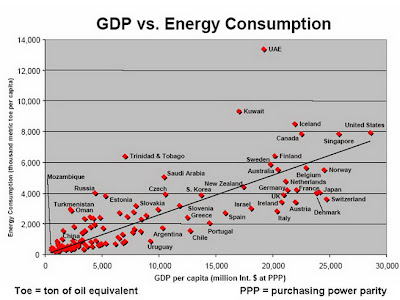 Just or pay the piper or shut up and freeze in dark like good sheep.
Posted by Fritz at 2:25 PM