Cyprus Haircut to Become a Scalping?

A few days ago word came that Cyprus was considering a one time tax on all banks holdings, of 6.7% of accounts less than 100,000 euros, and 9.9% on holdings greater than 100,000, the money gained to be used to help bail out the failing banks, and convince the powers of the European Union (Frauline Merkle) that the system was worth saving.

Not unexpectedly, the proposal was not well received by Cypriots in general, and people with money in the banks in particular.  Apparently, the Cypriot banking system was a favorite place for Russian thugs, oligarchs, friends of Vladimir Putin to stash their somewhat shadily collected cash.  Word came down that Vlad was not pleased. 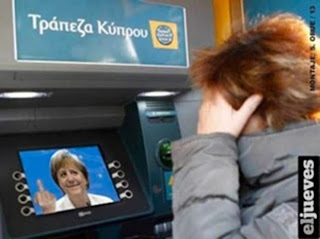 The Cypriot parliament refused to accept the plan, and continued to negotiate with anybody who would deal with them, and sought bailouts from Russia as well (unsuccessfully). Meanwhile, the banks were closed, and investors were unable to access their own money.

It appears a new plan has emerged from those talks, a plan to lean even more heavily on the the "big" investors. The new plan would take 20% of some deposits over 100,000 euros:


Cyprus conceded on Saturday to a one-off levy on deposits over 100,000 euros in a dramatic U-turn as it raced to satisfy European partners and seal an 11th-hour bailout deal to avert financial collapse.

The island's finance minister, Michael Sarris, reported "significant progress" in talks with international lenders, with the clock running down to and end-Monday deadline for Cyprus to clinch a bailout deal with the EU or lose emergency funding for its stricken banks and risk tumbling out of the euro zone. His counterparts in Europe's 17-nation currency union scheduled talks in Brussels for Sunday evening to see if the numbers add up, and the EU's Economic Affairs Commissioner Olli Rehn said progress was being made towards a solution.

As Cypriot party leaders met, a senior Cypriot official told Reuters that Nicosia had agreed with EU/IMF lenders on a 20 percent levy over and above 100,000 euros at No. 1 lender Bank of Cyprus, and four percent on deposits over the same level at others.

One wonders what Putin and his friends think of this plan. A mattress is starting to look like a better than average investment.
Posted by Fritz at 5:00 AM