The Usual Suspects Fighting About the Usual Things 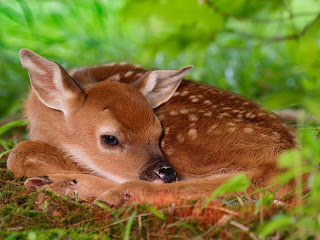 As happens periodically in the mid-Atlantic, after a few mild years of weather, the White Tailed Deer population close to cities and suburbs explodes because they cannot be effectively hunted in such areas.  Deer and cute and cuddly looking (don't be fooled), but the charm wears off once they start eating the expensive landscaping, crashing into your Prii, and giving you Lyme Disease.  There's not much to be done except encourage the few local hunters left to go after them with expanded seasons and generous bag limits.

Unless, of course, you're the federal government, and, despite the reign of pain that is sequestration, you can afford to hire sharp shooters to take care of the problem for you.  Then most of your neighbors will be quietly grateful, but a few anti-hunting activists will be wroth with you...


The federal sharpshooters in Rock Creek Park are on the lookout for deer drawn to the corncob bait. Wearing U.S. Department of Agriculture jackets and backed up by spotters, the shooters are equipped with night-vision goggles so they can distinguish a doe from a human interloper. 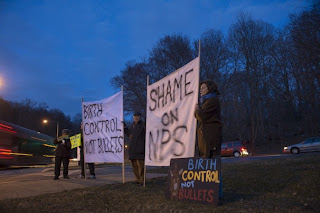 Just don't crawl around Rock Creek Park at night on all fours.  Unless you're a rapist.


Some of the sharpshooters are positioned on the wooded hillsides, and others are on the back of flatbed trucks that creep through the muted stillness of the park, which is cordoned off to traffic. The idea is to aim downward so any errant bullet will sink into the earth. Even the ammunition has been carefully selected to disintegrate in the deer’s body.

Despite the many safety precautions described by National Park Service officials, some residents are continuing to protest the deer shoot, which started Wednesday and will be completed Saturday. Sixty to 70 deer are expected to be shot. After the carcasses are tested for disease, the venison will be donated to food pantries.

The Park Service says that what it euphemistically calls a deer “harvest” is needed to safeguard the health of the park, the herd, and the people who live nearby or use the park. With 70 deer per square acre, the park has about four times the density considered ideal. 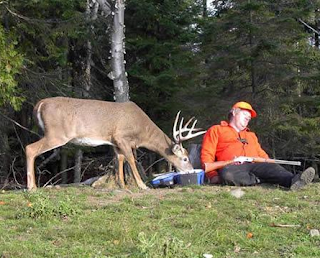 70 deer per acre?  That's not a park, that's a CAFO (Concentrated Animal Feeding Operation)!  And I have doubts that even a fourth of that, 17.5 deer per acre is reasonable (on our 2 acre back lot, we do occasionally have a herd of five or more wander by, but they live over a much larger area).  I suspect that some wrong numbers have slipped though the Washington Post's eleventy hundred layers of fact checking here.  Like maybe the difference between acres and square miles?  And acres don't need a square; they're already a measure of area.  Reporters can be so ignorant when they write about $#!* they no nothing of.  Like everything.

But some residents and animal rights activists, who fought a losing court battle to stop the deer shoot, say slaying animals in a city park surrounded by densely packed neighborhoods is barbaric, particularly going into the Easter weekend. They have turned out to protest and established a Twitter account to collect signatures on a petition urging the Park Service to stop the harvest. One person wrote on @rockcreekdeer that the otherwise tranquil park is being turned into a “killing field.”

To be strictly accurate, that should be mostly a "killing forest" as Rock Creek Park is heavily wooded.


“It shows so little respect for the community to do this during Passover and Easter weekend, when everyone in Washington is leaving town,” said Carol Grunewald, a Chevy Chase resident who was the lead plaintiff in a U.S. District Court case. In a March 14 ruling, the judge reaffirmed the Park Service’s authority to kill the deer if it is in the park’s best interest.

Huh?  What does deer hunting have to do with Passover and Easter and everyone leaving town?


The agency says the abundance of deer threatens the native plant species, endangering the food supply of other animals in the park. Park officials, citing safety concerns, did not allow reporters to observe the sharpshooters working in a stretch north of the National Zoo that is bounded by 16th Street and Oregon Avenue.

I doubt if safety was really the issue; I'm sure they just didn't want the reporters to be taking pictures of the government hunters carrying rifles, and possibly standing over the bloody corpse of Bambi.

I don't live near Rock Creek Park, but if I did I would be happy to have the hunters out to thin the herd.

UPDATE: Blogger Moe Lane suggests NPS release wolves in the park; I second that, and urge the park service to also establish a population of cougars (no, not the older women), to thin the deer and jogger herds.
Posted by Fritz at 9:07 AM