While I was off trying to earn a living the papal conclave went and found themselves a new pope.  In short he is:

Father Jorge Bergoglio,
Did not want to be Pope,
The Archbishop of Buenos Aires, Argentina,
The first pope from the Americas,
The first Jesuit pope (that appears to matter to Catholics),
Papal name, Francis I, apparently after Francis Xavier leader of the X-men first Jesuit.
Has one lung as a result of childhood disease,
Often rode the bus to work, cooked his own meals and regularly visited the slums.

I myself, am personally disappointed in the Cardinals for not stringing this out a little longer, and giving the girls of FEMEN a little more time to expose the hypocrisy of the church themselves (NSFWish). Keep the protests alive!

As often happens, Wombat-Socho included this in his weekly giant Rule 5 post, this week simply entitled "Rule 5 Monday".  Those tax mines have been pretty busy. 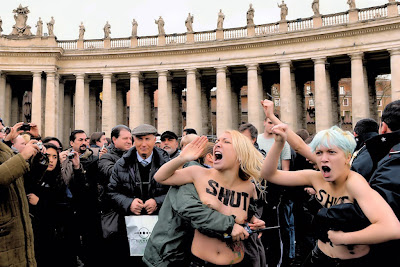