It's Not Paranoia If They're Really Out To Get You

I can understand that there’s always going to be people who are paranoid over government attempting to intrude into their life and their own financial (unintelligible). There’s no plan to go after handguns…

but according to Rep. Jan Schakowsky from ultra-blue Illinois:


“We want everything on the table. This is a moment of opportunity, there’s no question about it…we’re not going to be able to win [on handguns]. Not now…we’re going to push as hard as we can and as far as we can.”

From Hot Air. Meanwhile, Timothy P. Carney at the Washington Times argues its not so much that they want to take away your guns; they just don't like you!

Gun control efforts are largely a culture-war offensive by liberals who dislike the parts of America that own guns and love guns. This meddling motivation shines through in the rhetoric of gun control advocates and in the laws they push:

Chris Matthews, host of MSNBC's "Hardball," asserted that gun rights advocates aren't "normal people," they have no "other interests," and they are uninterested in their wives or kids.

After Sandy Hook, when liberals wrote and spoke about guns and geography, rather than about on poverty-filled cities where gun violence is concentrated, they typically focused on the South. "The South is the most violent region in the United States," a Washington Post article proclaimed.

Congressman Charlie Rangel, D-N.Y., said in January, "Some of the southern areas have cultures that we have to overcome."

MSNBC contributor Joy Reid wrote on Twitter in December that she was "getting a little tired of this meme that we have to have the rural South's permission to legislate on guns. The Union won. Get over it."

The Post's Gene Weingarten in 2011 spat on the Second Amendment as "the refuge of bumpkins and yeehaws who like to think they are protecting their homes against imagined swarthy marauders desperate to steal their flea-bitten sofas from their rotting front porches."

After Columbine, a Boston Herald op-ed described the average participant in a 1999 Boston Common pro-gun rally as a wannabe "hicksville cowboy, as in way out there, somewhere off the Mass Pike or at the far reaches of 93. From towns with something to prove and lots of Amvets posts."

And President Obama in 2008 famously told a wealthy crowd at a San Francisco fundraiser that rural voters "get bitter, they cling to guns or religion or antipathy toward people who aren't like them ... "


In "Gun Guys," Baum (Amazon link)-- a true-blue liberal -- says that what gun control "did best was express disapproval of a lifestyle and the culture that enjoyed it."

Liberals, Baum writes, "recognized the gun as the sacred totem of the enemy, the embodiment of this abhorrent world view. They believed that they could weaken the enemy by smashing his idols -- by banning the gun if possible ... "

Many liberals hate it that some conservatives have a different set of values, morals and aesthetics -- and so these liberals want to use the federal government to fix that.

And for a taste of the hypocrisy of the democrats on guns: What's wrong with this picture? 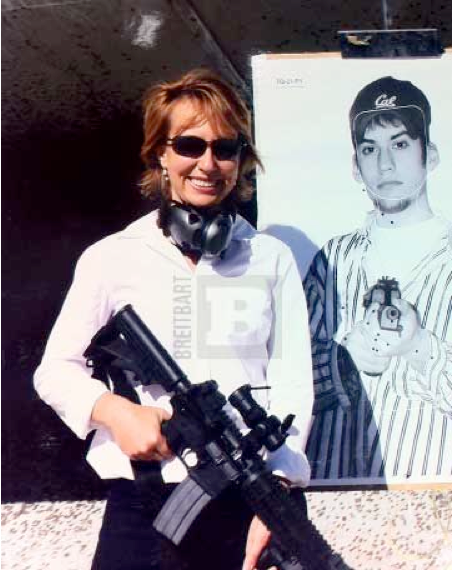 Nothing really, just a happy woman out blasting fake terrorists for a politically opportunistic photo-op:


According to the source, the image sent to Breitbart News was cropped to protect the identity of the person on the right-hand side of the original photograph (to Giffords's left). The source, who is a member of the law enforcement community, told Breitbart News:

In January 2011, Giffords suffered near-fatal wounds in a mass shooting while meeting with constituents in Tucson. The perpetrator used a 9mm Glock 19 semi-automatic pistol...

...the AR-15 that Giffords is shown holding in the image is a standard, semi-automatic civilian weapon, according to the source who saw it being taken. The source saw a campaign official take the photograph, which was later provided to law enforcement personnel as a courtesy, according to the source. The source says the existence of the photograph has been known in the local law enforcement community for a while: "I'm not the only one who knows about this photo."

Multiple law enforcement sources in Arizona told Breitbart News that Mark Kelly's campaign against "assault weapons" has generated resentment within the law enforcement community--and a desire that the photograph be made public.

So back before the Tucson shooting, Rep. Giffords was so hot to show her Arizona constituents that she was a true-blue red gun loving hick like them she "asked" the local law enforcement to set her up with a photo-op with an assault scary black rifle.  I wonder if they did it on official work time?

Women are permitted to change their minds, of course.
Posted by Fritz at 8:30 AM