Feathers, Flowers, Fossils and Fur at the Beach 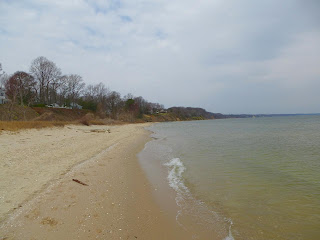 A strong southeast breeze brought in warm air today, almost 60 F by the time we got ready for the beach walk.  The Bay had white caps, but the Flag Harbor jetty protected the beach on the north side.  It was threatening rain, but it never quite made it. 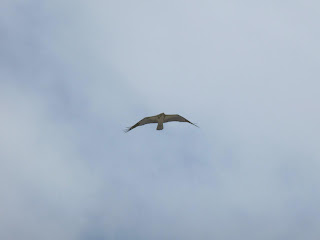 A fly over by the local Osprey. 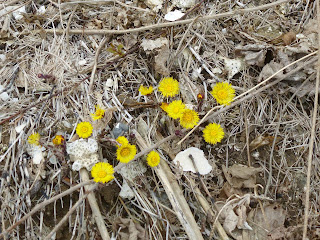 Coltsfoot was in flower in many areas of the cliff today, one of the first of many wildflowers to come.   You can see fragments of fossil coral and shell in the soil that it's growing in. 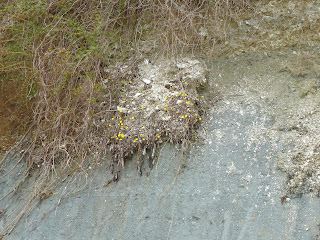 Here it is growing on some of the cliff getting ready to slide off.

Coltsfoot is a perennial herbaceous plant that spreads by seeds and rhizomes. Tussilago is often found in colonies of dozens of plants. The flowers, which superficially resemble dandelions, appear in early spring before dandelions appear. The leaves, which resemble a colt's foot in cross section, do not appear usually until after the seeds are set. Thus, the flowers appear on stems with no apparent leaves, and the later appearing leaves then wither and die during the season without seeming to set flowers. The plant is typically between 10 - 30 cm in height. 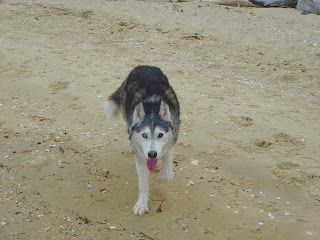 Skye was happy to get out. 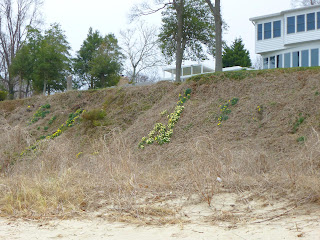 Daffodils growing down the cliff.  Probably left over from gardens of long ago which have slipped over the edge. 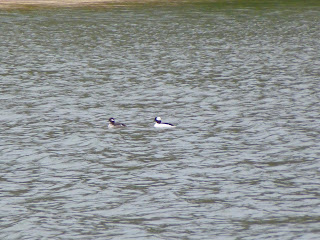 And the Buffies are still hanging around.
Posted by Fritz at 1:48 PM