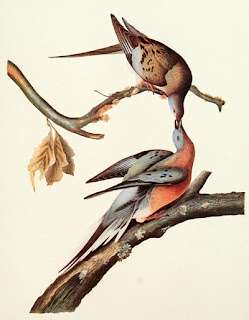 The Plan to Bring the Iconic Passenger Pigeon Back From Extinction

...scientists are meeting in Washington, D.C. to discuss a plan to bring the passenger pigeon back from extinction. The technical challenges are immense, and the ethical questions are slippery. But as genetic technology races ahead, a scenario that’s hard to imagine is becoming harder to dismiss out of hand.


Passenger pigeons were named for their passage up and down eastern North America in flocks several hundred million strong. To sustain long, strenuous flights, the birds devoured forests and left destruction in their wake. Ornithologist J.M. Wheaton described one flock as a rolling cylinder filled with leaves and grass. “The noise was deafening and the sight confusing to the mind,” he wrote in 1882. It was easy to tell where the pigeons had roosted: The trees were crippled, their branches cracked off and picked clean of nuts and acorns. For miles, the ground was coated with a layer of feces more than an inch thick. 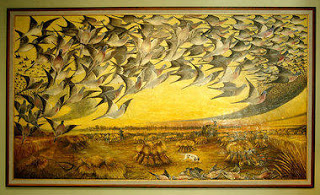 Sounds lovely, doesn't it? But we have similar problems with Starlings, Blackbirds and other flocking birds, and we still manage to get by.

Even before Europeans arrived, hunters shot nests with arrows or knocked them down with poles. But in the mid 19th century, the railroad and the telegraph turned the pigeon into a national commodity. Professional trackers followed the flocks and descended on nest sites. Their tactics were brutal and effective: Firing into the trees brought down thousands of birds in one afternoon. Setting a match to the combustible birch bark forced terrified chicks to fling themselves from their nests. By the late 1850s, flocks were shrinking. By 1889, the population was in the thousands. 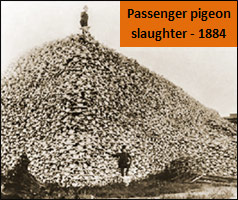 Pigeon pot pie, anyone?  So how would we go about bringing them back to life?


Here is Novak’s plan in broad strokes: Sequence the band-tailed and passenger pigeon genomes and find the significant differences between them. Edit the DNA from a band-tailed pigeon germ cell – the type that develops into sperm or eggs – to match that of the passenger pigeon. Implant this cell into the egg of another pigeon, perhaps a rock pigeon, which is easy to work with in the lab. Hope that the germ cell will migrate into the gonads of the developing chick. Allow the chick to grow up, and breed two such birds to create a passenger pigeon....Novak hopes to set up a sanctuary of lab-generated pigeon chicks in the bird’s original breeding territory. He would then train homing pigeons to pass over the nest site, showing the chicks their ancestral migration route. Novak says passenger pigeons would restore balance to forest ecosystems, clearing brush and fertilizing soil. 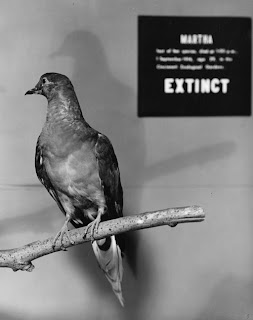 So, what's the worse that could go wrong?

This strategy doesn’t make sense to Blockstein, who says “quote-unquote” before every mention of de-extinction. He doubts that any small population could survive long enough to reach its original numbers. If it did, he fears the bird would become a pest to farmers, consuming commercial berries and grain. Stanford University bioethicist Hank Greely shares this concern. “You’re re-introducing to the same geographic region,” he said. “But not to the same environment.”

No governing body exists to make decisions about re-introducing an extinct species. Once the science is within reach, Novak says he will work with wildlife management authorities to set up a legal framework.

The Passenger Pigeon might be a good practice for the real big de-extinction projects; bringing back the Wooly Mammoths and Sabre Toothed Cats.
Posted by Fritz at 6:23 PM