Greenland, Not Yet Green, Still Frozen

A few months ago there was a flurry of articles on the alleged melting of Greenland this past summer, which had apparently had a rare widespread surface melting event:

It was sold as proof that global warming was finally beginning to kick in start the process that would finally cause the acceleration of sea level rise, and lead to coast flooding, etc, etc, etc,.  This, despite the fact that global temperatures had not at that point (and still counting) increased in the last 16 years:


Over a few exceptionally warm days last July, Greenland’s frozen surface turned into a colossal puddle. Even the coldest parts of the world’s largest island saw ice thaw and rain fall, fuelling concerns over the future of glaciers that hold enough water to raise global sea levels by around 7 metres.

A record of the past written in an ancient ice core now reveals that Greenland’s ice sheet is not melted as easily as some fear. But the message is not entirely reassuring: it also implies that Antarctica has much greater potential to raise sea levels than previously thought.

Climate Science just had another Emily Litella moment when it was revealed that the findings of massive Greenland glacial melt this summer was greatly exaggerated by an error in an algorithm used to calculate ice melt from satellite measurements.  From Watts Up With That:


This is an interesting admission:


The melt extent algorithm used by Greenland Ice Sheet Today has been overestimating the melt extent, and as a result, daily images posted on this site in February and March may have indicated melt where none occurred.

This makes you wonder what other kinds of issues remain undetected in the satellite data. NSIDC has had to issue corrections in the past, when it was pointed out that their data and reality didn’t match. – Anthony

From NSIDC: An early spring re-calibration for melt detection

The algorithm for the Greenland Ice Sheet Today daily melt extent has been revised to account for unusually warm winter snow layers and residual meltwater deep in the snow. Meltwater from last summer’s intense melt season did not completely re-freeze through at least mid December. The adjusted algorithm shows greatly reduced melt extent for early 2013. This much lower extent is more consistent with available weather and climate records.

What, no "Ooops, sorry about scaring you with stories of impending dooooooom?"

So what went wrong?


The melt detection method, based on passive microwave emissions, is primarily sensitive to near-surface conditions, but has some input from the snowpack down several meters (10 to 20 feet). Heavy snow fell during the relatively warm winter, burying and insulating deeper snow. This contributed to anomalously high temperatures for the uppermost layers of snow this winter. Additionally, models based on snowpack properties suggested that some 2012 meltwater remained unfrozen at 5 meters depth (approximately 16 feet) in mid-December. The model results are consistent with observations from JAXA’s AMSR-2 sensor.

According to thermometers on the ground it only really got above the thaw temperature in this area of Greenland for one day during the time in question, so, in fact, there could be no such thaw. 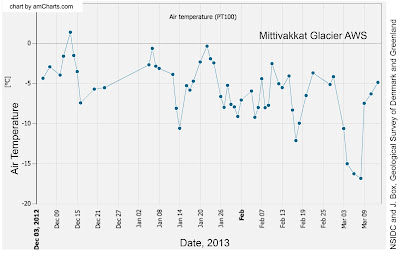 OK, I'm kidding; I don't expect that at all.  I expect major new outlets to totally ignore the correction, and the usual cast of characters pushing the global warming climate change hysteria to either ignore it, or brush it away as water (or maybe ice, who knows?) under the bridge.