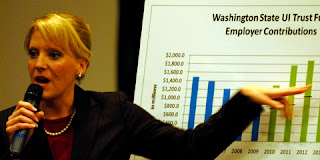 Washington State that is: State Democrats rush a vote as GOP Senator steps away to nurse her baby

When a Republican state senator left the floor to nurse her newborn son, Democrats seized the opportunity for a quick vote without her.

Washington State Wire reporter Erik Smith, who is covering his 14th legislative session in Olympia, has an interesting account of what happened on the State Senate floor Tuesday when Janea Holmquist Newbry, from Moses Lake, stepped away to feed her baby. 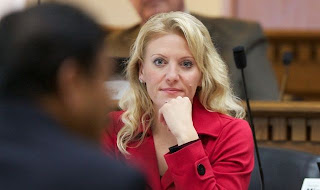 You have to give the democrats credit for caring what a woman and mother thinks, and trying to nullify her vote to represent her voters.


Members of the Senate Democratic Caucus voted yes as their names were called. Members of the Majority Coalition Caucus voted no. And just in time, Holmquist Newbry emerged from the lounge to cast her vote. The motion failed 25-24.

It would have been a lot more amusing had she come back to the floor while nursing and voted. Clearly a GOP politician to watch.  Found at Instapundit.

As often happens, Wombat-Socho included this in his weekly giant Rule 5 post, this week simply entitled "Rule 5 Monday".  Those tax mines have been pretty busy.
Posted by Fritz at 7:08 AM