Two benevolent beavers may have saved the water supply of Salt Lake City from contamination on Tuesday. The heroic herbivores now fight for their lives after being soaked by the toxic diesel fuel spill.

The beavers’ dam stopped an 8,000-gallon diesel fuel spill from spreading into the reservoir in Willard Bay State Park in Utah, reported the Standard-Examiner. The two American beavers (Castor canadensis) who lived in the dam were soaked by the toxic diesel which poured from a leaky Chevron pipeline. The beavers are now receiving medical care at a local wildlife rehabilitation center.

One of the beavers suffered a worse diesel soaking than the other.

“I found it out of the water kind of sitting in the vegetation,” Utah Division of Wildlife Resources conservation officer Mitch Lane told the Salt Lake Tribune. “It looked like it was trying to get out of the water and clean off. He wasn’t really active. I could tell the fuel was taking its toll on him.” 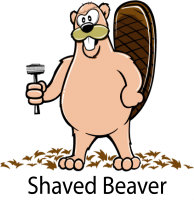 I hope it's not so badly contaminated that they have to shave it.  They look pretty funny shaved.


The other beaver had already been cleaned and was starting to recover by the time the second was brought into the rehabilitation center, Lane said.

Of course, if they can't save them, they can always make a beaver coat.