The Dead Mouse Bounce - US to Bomb Guam

US gov't to air-drop toxic mice on Guam snakes

Dead mice laced with painkillers are about to rain down on Guam's jungle canopy. They are scientists' prescription for a headache that has caused the tiny U.S. territory misery for more than 60 years: the brown tree snake.

Most of Guam's native bird species are extinct because of the snake, which reached the island's thick jungles by hitching rides from the South Pacific on U.S. military ships shortly after World War II. There may be 2 million of the reptiles on Guam now, decimating wildlife, biting residents and even knocking out electricity by slithering onto power lines... 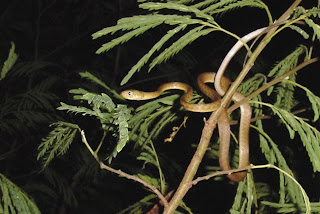 I wonder how much 2+ million laced mice cost?

"We are taking this to a new phase," said Daniel Vice, assistant state director of U.S. Department of Agriculture's Wildlife Services in Hawaii, Guam, and the Pacific Islands. "There really is no other place in the world with a snake problem like Guam."

This is one of those cases where a single invasive species can, and has, made an enormous, and unfortunate effect on the area they have been spread to.  I've heard biologists who study invasive species say that, on average, out of every ten species that get transferred to a foreign region, only one survives to become an established population, and that for every ten of those established, only one goes on to become a "problem" species.

Curiously the poison chose to kill the snake was acetaminophen:


The solution to this headache, fittingly enough, is acetaminophen, the active ingredient in painkillers including Tylenol.

The strategy takes advantage of the snake's two big weaknesses. Unlike most snakes, brown tree snakes are happy to eat prey they didn't kill themselves, and they are highly vulnerable to acetaminophen, which is harmless to humans.

No, acetaminophen is not "harmless to humans"; an overdose is well known to cause liver damage, which can be fatal, and interacts badly with alcohol (read the label).  However, I doubt that many Guamanians (or US servicemen) are going to eat the mice that come raining out of the sky.  It's probably a good time to lock up any dog, however
Posted by Fritz at 5:00 AM