I Detect a Rumble in the Force...

All of a sudden, the hit counts spiked to levels unheard of recently, and all evidence points back to this Rule 5 post on Heidi Klum, even after considering the hits from Wombat-Sochos weekly Rule 5 post, and a pick up from the American Power Blog, with Oscar coverage.  With the lightening speed of deduction driven into me in way too many years in the hard sciences, I deduced that Heidi Klum must have done something newsworthy in the past day or so. A quick search with Google shows that, indeed, at one of the Oscars (which I don't watch, despite the Rule 5 value) parties, Heidi made the news by shockingly, wearing a plunging neckline:

E (with the funny symbol to make it look like an exclamation mark):  Oscars Rack Report: Heidi Klum Gets Schooled by Les Mis Star Samantha Barks


Sadly, Heidi Klum crossed that line between sexy and skanky in her Julien Macdonald dress. The Project Runway host's chevron print gold gown is gorgeous, but that neckline plunges just a little bit too low (who are we kidding? It's a lotta bit too low!).

So, for those taking notes at home, side boob = hot. Bottom of the boob = not.

and then provided this photo to attempt to prove their point: 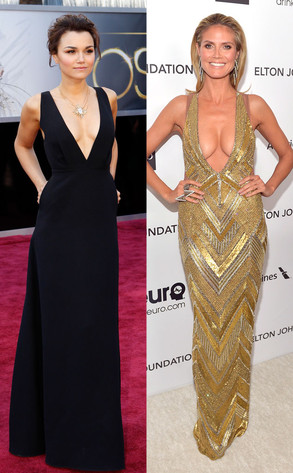 They also helpfully provided this "sideboob" gallery to showcase their ideas.

Well, they both look on the edge of an unfortunate wardrobe malfunction to me, but I don't see an enormous difference.  I recently saw a blog article, I think it was on Ace's, but I can't find it now, that hypothesized that the degree of sexiness of a woman clothes were not determined by how much they reveal, but by how much they look like they might reveal by "accident".  I can't say I necessarily agree with that, but I'm willing to be a test subject in the scientific study to prove it.  On that basis, I would have to give Heidi's a slight nod.

UPDATE: Wait, I found it, it was on GOODSTUFF'S (what's with the all caps? You shouting?), and it's called the Theiss Tittilation Theory:


The Theiss Titillation Theory basically says that the sexiest clothes aren’t those that show a lot, but those that look like they’re just about to, or, ”the degree to which a costume is considered sexy is directly proportional to how accident-prone it appears to be.”  It’s named for William Ware Theiss, one of Star Trek’s costume designers, who, in order to skirt around rather rigid censorship rules, got creative with what he showed and hid.

OK, digression over.
US Weekly had this headline:  Heidi Klum, Britney Spears and Others Show Off Major Cleavage at Oscar Parties 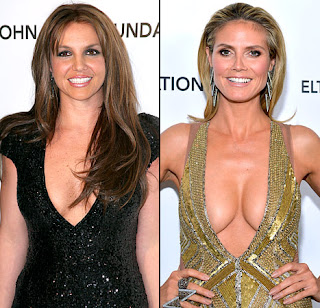 Best Supermodel Boobs:
Heidi Klum showed off her ample assets at the same bash in a gorgeous gold Julien Macdonald-designed dress. "It's a little low-cut," the Project Runway host, 39, joked to the New York Post. "I'm worried about it because my boobs could fall into my dinner, so I'm being very careful." 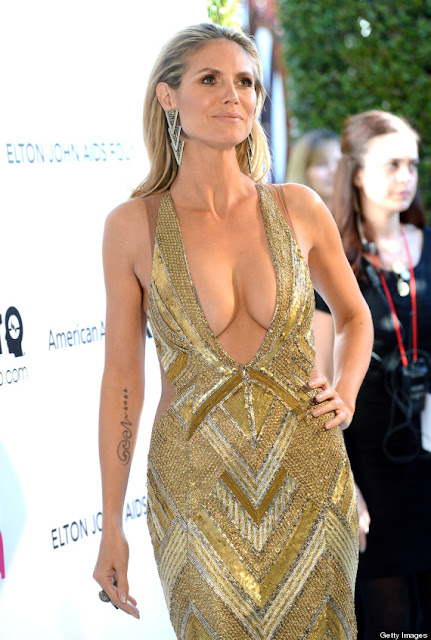 Heidi Klum must be single-handedly supporting the double-sided tape industry tonight. The 39-year-old model may have been at the 21st Annual Elton John AIDS Foundation Academy Awards Viewing Party, but her Julien Macdonald gown really showed off her golden globes.

Klum easily wins the award the award for breast dressed tonight, and is likely receiving a standing ovation of a different kind from men in their living rooms across the world.

Now, that's just a dumb tattoo.  If you're going to get something that permanent, shouldn't it be something distinguishable from your doctors signature on your anti-psychotic prescription?