A chunk of space rock, estimated to weigh about 10 tons, struck Chelyabinsk, Russia this morning, destroying a building, and killing at least 5 people?

Initial reports suggest it was shot at by Russian air defense forces, but they do not appear to have fired on it.  The meteorite apparently exploded at an altitude of 10,000 feet, due to the heat of reentry, as meteorites often do.

It is suspected the meteorite may be a piece of the larger asteroid 2012 DA14, which will make a pass at the Earth around 2 PM EST today about 17,000 miles away, a close shave by astronomical standards.  Meteorites and asteroids often shed pieces or explode in space due to a process called the YORP effect, uneven solar heating which causes them to rotate faster and faster, until the centripetal force overcomes their weak gravity, and they break apart.

UPDATE:  Apparently the Chelybinsk meteorite and the 2012 DA14 had very different orbits, and so are probably not related: 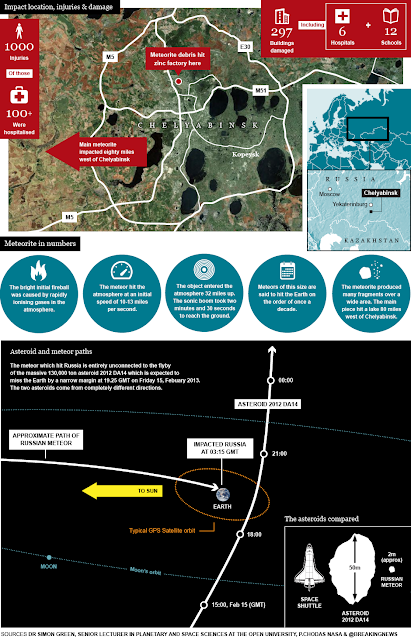