But not for another 100 million years or so: Supervolcano forming north of New Zealand

A supervolcano forming north of New Zealand could spell the end of the world - but there is no need to panic, it won't happen for at least 100 million years.

Researchers from the University of Utah have warned of impending doom after discovering that two or more continent-sized piles of rock are colliding as they move at the bottom of Earth's thick mantle, 2896km beneath the Pacific Ocean near Samoa.

They said the movement could be the beginning of a vast eruption that could threaten life on earth in 100 million to 200 million years. 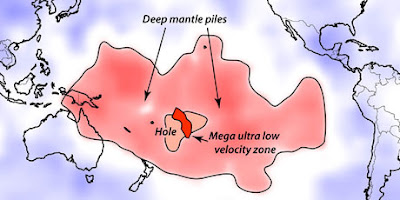 It is hypothesized that 70,000 years or so ago, the eruption of a supervolcano called Toba almost caused an extinction of the human race.

"What we may be detecting is the start of one of these large eruptive events that - if it ever happens - could cause very massive destruction on Earth,'' said seismologist Michael Thorne, the study's principal author and an assistant professor of geology and geophysics at the University of Utah.

"This is the type of mechanism that may generate massive plume eruptions, but on the timescale of 100 million to 200 million years from now. So don't cancel your cruises,'' he said.

If the human race still exists in some form in 100 million years, and they haven't found a way to get off the planet and colonize the rest of the universe, they will have deserved it.  If nothing else, they should be able to find a way to tap the heat, and use it, getting needed energy and cooling the magma.