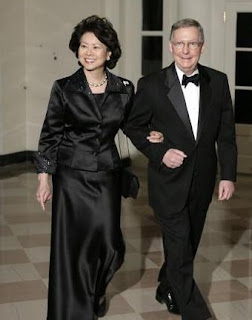 By Any Means Necessary

For months, the liberal super PAC Progress Kentucky has attacked McConnell and held demonstrations at his offices and home.

Recently, the group turned its attention to McConnell’s wife, former Secretary of Labor Elaine Chao, with a focus on her race.

In a Feb. 14 Twitter message, Progress says: “This woman has the ear of (Sen. McConnell) — she’s his wife. May explain why your job moved to China!”

I call on all democrats to repudiate this racism.