Transparency for Thee, but Not for Me

Two contrasting stories on the relationship between the US government and us citizens regarding privacy concerns:


American government agencies – state, local, and federal -- made a record 13,753 requests to read emails or gather other information sent through Google’s Gmail and other services in 2012, more than half without warrants, according to statistics released by Google.

Most of these 13,753 requests, 6,542 of 8,438 in the latter half of 2012 alone, were done without a search warrant, Google data show. Google did not make available any detailed data prior to June 2012, nor did it make available which requests came from the federal government and which came from state or local law enforcement agencies, when asked by CNSNews.com.

So it would seem to stand to reason that we, the people, should have a fair chance to find out what the government is doing behind our backs through e-mail.  Take for example, Richard Windsor, the nom de plume of  Lisa Jackson, former (still?) EPA Administrator, accused of trying to hide collusion with various environmental groups by using an "inside" email account known only to EPA insiders and the inside NGOs to prevent the email from being FOIAed. Once the account became known to opponents of various EPA actions, FOIA filings were made against that account, resulting in such useful returns as this one: 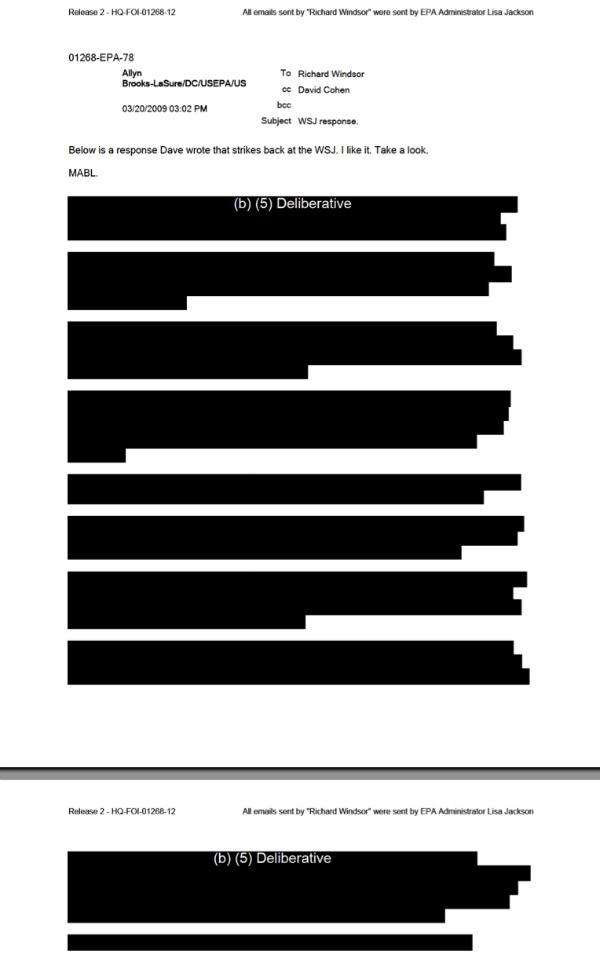 Note that this email seems to deal with a response of the EPA to a Wall Street Journal (WSJ) editorial, and describes that response as a "strike back."  I would think the WSJ and the people as a whole have an interest in how the EPA is planning to "strike back" at opponents.
Posted by Fritz at 10:47 AM