Police are under investigation for jokingly filling in a witness statement in the name of a force dog.

Officers became exasperated when prosecutors asked for an account of a crime from a ‘PC Peach’, not realising Peach was the name of a police dog.

So they completed the form as if it had been written by the alsatian, and signed it with a paw print.

The dog’s statement read: ‘I chase him. I bite him. Bad man. He tasty. Good boy. Good boy Peach.’ 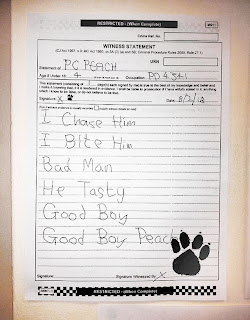 Not bad handwriting, for an Alsatian.  Skye, of course, being a Siberian Husky could do a much better job, in Chukchi, but alas, she has no interest in catching criminals unless they have treats.

The form was pinned up at a West Midlands Police station last week for the amusement of colleagues, who are often at odds with the Crown Prosecution Service (CPS) over the handling of cases.
...
The CPS, however, failed to see the funny side. Officials are believed to have complained to police that their mistake has been turned into a very public joke.

I thought the Brits were noted for their understated, dry humor.  I guess authorities everywhere loose theirs in proportion to the height of the hierarchy.

This is being considered by West Midlands Police’s Professional Standards Department and the officer who shared the picture, PC Mark Tissington, referred himself to the internal discipline unit. Sources say he is unlikely to be reprimanded.

Maybe there is just a little sanity over there.