I Wouldn't Have Thought the Job was This Dangerous 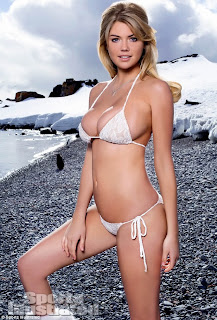 Kate Upton: I nearly got frostbite on SI Swimsuit Photoshoot

Kate Upton has revealed that she suffered from frostbite after shooting her second Sports Illustrated cover in Antarctica.

For the assignment the supermodel stripped off to a tiny white string bikini on the shores of the South Pole, where the average high is around -49 degrees Fahrenheit.

I don't think the "South Pole" has shores seeing as how it well in to the interior of Antarctica , but they're Brits and they have that cool accent that make even Peirs Morgan sound intelligent, so maybe they know better.


Describing the effects the sub-zero weather had on her body she told the Today show: 'When I came back, I was like losing hearing and eyesight because my body was shutting down, it was working so hard to keep me warm.'

The publication chartered the boat for a ten-day voyage between Argentina and the South Pole. Apparently, they wanted to photograph her with a backdrop of icebergs and polar wildlife.

Asked what the penguins were like, she recalled: 'They kept me going, they're adorable. Any time I was like, I can't do it anymore, I would look at them and be like, okay, for them.'

In photographs from the photo shoot, Miss Upton is seen braving minus temperatures in just a small white bikini top and tasseled bottoms with her feet protected in thermal moon boots. Eventually, Kate was able to swap the ebb and flow of the Antarctic Sea for the firm ground of Antarctica itself.

Bizarrely, she was greeted by a man dressed as an Oreo cookie once she stepped on terra firma. It is not clear why there was a man dressed as a giant biscuit on the icy uninhabited continent, but he might have been overseeing the delivery of 5,000 Oreo cookies to the scientists based at the Palmer Station in the Antarctic Peninsula.

The sacrifices supermodels make; we need to honor them more. Can we change President's Day to Supermodel Appreciation day?