Topless women protest against Berlusconi as he votes in election


A group of topless women were dragged away by police on Sunday when they protested against former Prime Minister Silvio Berlusconi as he voted in Italy's election.

The protesters, from the Ukrainian women's rights group Femen, shouted "Basta (Enough) Berlusconi", as the media tycoon was voting in a polling station in a Milan school. 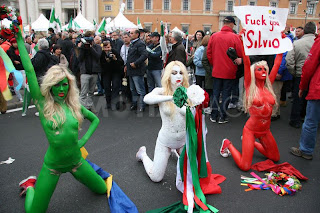 This is just too good to believe; two of my favorite foreign affair, Silvio Berlusconi, and the topless protesters of Femen, together in one event.  So why a sign in English at a protest in Italy?


The same words were painted on their bodies.

Police quickly grabbed the women and roughly bundled them away.

Not before they got plenty of camera time, though. I love the Italian Flag colors, girls; good job! 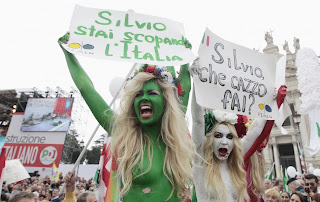 Oooh, oooh, can I hope for the girls to come to D.C. to protest Sen. Menendez, and his alleged trips to the Dominican Republic with a high powered supporter to visit the teen age prostitues there?  I'll take a day off work to take pictures of that.

However, my guess is the Femen will give any US democrat a free pass.


The 76-year-old billionaire, who was pushed out of power in November 2011 as Italy faced a grave financial crisis, enrages feminists who accuse him of exploiting scantily-clad showgirls on his television shows and degrading women with off-colour jokes. 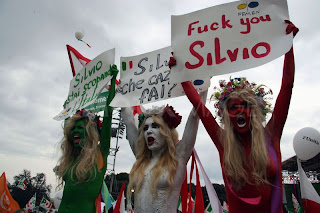 I don't think that's an accusation, I think that's a fact? But what of it?  Lot's of TV types sell sex; pretty much all of them,  and that, in turn is what Femen is doing, selling their sex in the interest of their politics.

On the other hand, no woman has ever, to my knowledge, accused Silvio of doing anything to or with a women who didn't voluntarily associate with him.  And a large number of astonishingly good looking women chose to associate themselves with the randy old man.  He even used his authority to help a few good looking women into politics.


During the election campaign his center-left rival Pier Luigi Bersani accused him of treating women like inflatable dolls.

An Italian woman has demanded an apology after he made suggestive remarks to her while they were on stage together at a business event. 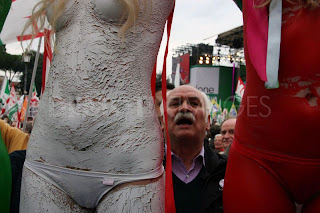 
He says he holds women in high respect and that he does not mean to offend anyone with his jokes.

And, sadly, I missed a previous chance tom mix Femen with Silvio, when they celebrated his fall from power last November with bare tops and champagne:

Now that Berlusconi has officially resigned, FEMEN has begun celebrations in classic Ferrari Formula One style. After marching to the Italian embassy in Kiev, FEMEN began shouting Ciao to Berlusconi, as well as other key phrases better left unsaid. The group of five girls, again led by Inna and Alexandra Shevchenko, held various signs expressing their glee, most prominent of which was the simple text, "FINISH" likewise in classic Formula One style. 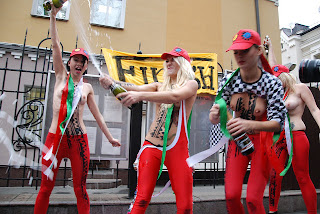 Fortunately, other bloggers were there to carry the heavy load, and catch the story that the major networks won't touch with a ten foot satellite antenna.


To continue the Formula One mood, the girls brought ample amounts of Champagne with them, drank heavily and splattered security guards and passers by alike in traditional fashion.  While the show is fun, their message was anything but. FEMEN demands that Berlusconi now be tried for his crimes in Italian court. Silvio Berlusconi must answer for his crimes of patriarchal brutality, and no leniency should be shown. These ladies take serious offense to Berlusconi's treatment of women and demand he be made an example of. 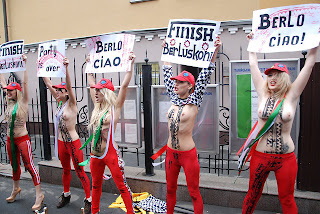 This protest was carried out at the Italian embassy in Kiev, Ukraine.  I doubt that's nearly as much fun as traveling to Italy to take off your top.


While Italy's reaction to FEMEN's demand is thus far unclear, there is little chance that FEMEN will see their demands met. None the less, the fact that Berlusconi has ceded power is a step in the right direction. Let us hope that his predecessor has more common sense.

Come now!  I look forward to years more fun with both Silvio and Femen.