Maybe We Should Be Chumming With This Stuff!

This Is a Fish on (Prescription) Drugs

In a paper published Thursday in Science, a team of Swedish researchers ... tested various Swedish bodies of water for the levels of an anti-anxiety drug called oxazepam—like many drugs, oxazepam doesn’t get filtered out by sewage treatment plants. In a lab, the researchers then placed wild European perch in tanks with comparable drug levels. The researchers found that the drugs were, indeed, having an effect: Even at dosages at the lower end of what they found in the wild, the fish in the oxazepam tanks were less social than those in the control tanks. The drugged fish put more distance between themselves and other fish, and they ate faster than normal. At higher dosages, the researchers also found an increase in what they termed “boldness,” the lack of hesitation with which the fish entered an unfamiliar area.

“We were very surprised,” says Jonatan Klaminder, an environmental scientist at Umea University and one of the co-authors of the paper. “The concentrations out in the environment are very low, but it’s still enough to generate effects that we know are relevant for ecological processes.” He adds that most of the behavioral changes they found were, from the point of view of each fish, actually productive: The fish feed at a faster rate, they become more active. “They actually perform better,” he said. For perch, at least, putting oxazepam in a river is a bit like putting Adderall in the water supply of a college dorm (or cocaine in Charlie Chaplin’s salt). 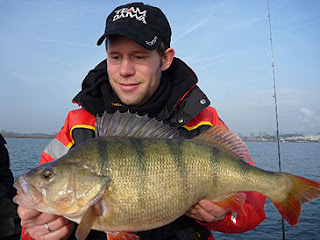 Incidentally, the European perch (Perca fluviatilis) is pretty much the Eurasian equivalent of the North American  Yellow Perch (Perca flavescens).


However, in the lab there weren’t any predators. And as Klaminder and his co-authors point out, oxazepam-dosed perch, swimming around blithely in the wild by themselves, are probably at higher predation risk. Also, the fact that the drug makes them eat so ravenously could throw their environments out of whack. The plankton that perch eat in turn eat algae, and if the perch ate up all the plankton the algae would run rampant, choking off the rest of the life in the area.

I was with you as far as the faster feeding and higher predation risk, but that ecological effects stuff is just rampant speculation.  How can fish that have all been eaten because of their lack of predator avoidance over graze the plankton?  The $#!* scientists write trying to get grants...
Posted by Fritz at 7:33 PM