Scientists have found reproductive abnormalities in yellow perch in three Maryland rivers that are either heavily suburbanized or rapidly developing, which they say helps explain why the distinctive black-striped fish are not thriving in those Chesapeake Bay tributaries and may be linked to toxic pollution.


Significant numbers of eggs produced by spawning female perch in the Severn and South rivers in Anne Arundel County and in Mattawoman Creek in Charles County failed to develop completely, according to a three-year survey conducted by federal and state researchers. Male perch in those rivers also displayed more abnormalities than did their counterparts from two mostly rural rivers in the upper bay.

The findings are "strongly suggestive of contaminant problems," said Jim Uphoff, a biologist with the Maryland Department of Natural Resources. Although no specific pollutant has been identified, he and other researchers say they suspect the abnormalities may stem from exposure to pharmaceuticals, heavy metals or polychlorinated biphenyls, a group of toxic chemicals once widely used in electrical equipment... 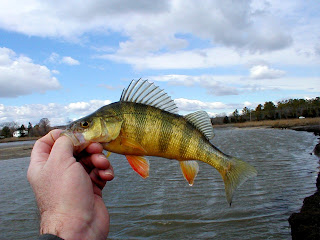 The scientists collected water and fish tissue samples, but the analysis of those has yet to be completed, so it's not clear if any particular contaminants were present. While cold weather and heavy rainfall during spawning season also can influence reproduction, the researchers say they don't believe those explain the problems they're seeing. Blazer said other studies suggest that the abnormalities in the fish may be caused by exposure to contaminants, including PCBs, metals and pharmaceuticals.

So what are you waiting for?