Will Sequestration Kill the Bay?

CBF joins the chorus of liberals decrying the sequestration:


Among the budget cuts predicted by the White House due to sequestration, Virginia stands to lose nearly $3 million for clean air and water programs.

In the grand scheme of Chespeake Bay money, $3 million really isn't that much, when you consider that the estimated cost of the Bay Diet is abut $25 billion (with a "b").

“Right now is a critical time for Chesapeake Bay restoration. We have a great plan in place. We've started to see it implemented,” says Christy Everett, CBF’s Hampton Roads director. Everett says that grant money from Washington helps with sewage treatment plant upgrades, technical assistance to farmers who want to put in pollution control practices and funding to local governments to prevent stormwater pollution. “The money is passed through Washington but really ends up here in the local level and it ends up here for pollution-prevention practices,” explains Everett.

CBF warns that a deterioration of water quality could adversely affect commercial and recreational fishing as well as tourism based around the Chesapeake Bay.

Is the sequestration going to keep other recreational and commercial fishermen off the Bay? I doubt it, but if so, I'm for it!


The American Lung Association says that cuts for air quality control programs means fewer resources for promoting clear-air practices at factories and less money for monitoring air pollution. “Sequestration could actually keep EPA from properly monitoring the levels of pollution in our air and keep them from notifying the public about taking action,” says Laura Kate Bender, coordinator for Virginia Healthy Air Coalition.

ALA says increases in air pollution for vulnerable populations can drive up healthcare costs and even cause premature death.

Oh no, we're all gonna die if they don't get every cent of the increase they expect!


Both the ALA and CBF warn that short term cuts to water and air quality programs could have long lasting negative economic effects.

So could the US going bankrupt. 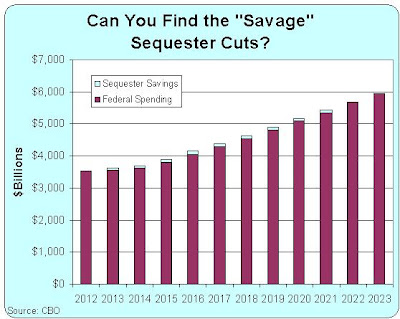