The odd "scientists tell you about sex" type articles have been piling up in the digital fridge for a couple weeks now.  Take all these with a grain of salt.  Scientists put them out to get attention, journalists publish them to make money, and bloggers blog them to get hits.  At least I'm honest.  Starting with the oldest first, this one has been around the block a couple times lately...


According to a new study, women who drink two glasses of wine every day say they're having better sex than their teetotaling counterparts. To be fair, that could be the wine talking.

The survey, conducted at the University of Florence in— wait for it— Italy, assessed the sexual satisfaction of 800 women between age 18 and 50, using something called the Female Sexual Function Index. The FSFI is a 36-point scale that scores women's sexual satisfaction based on self-reporting of orgasm, pain, and arousal. Women who drank zero glasses of wine scored an average of 24.4. One glass a day drinkers clocked in at 25.9. And the two glasses per day crew blew the competition away, amassing a score of 27.3 on average.

Of course, it doesn't necessarily mean they'll have better sex with men...


...Elaborating further, on a scientific angle, Dr Avdesh Sharma, a consultant psychiatrist, and an expert on relationship issues shares, "Sex is a way of bonding at the physical, mental and emotional level and leads to health (including psychological) benefits. If it is used as a mechanical process, it may have limited benefits. There are physiological benefits of positive changes in parameters like pulse, heart rate, reduction in blood pressure (after an increase in B.P. specially if vigourous sex is tried), dilation of blood vessels and capillaries of the skin, leading to a 'glow', burning of a few calories (depending on the duration of the act and vigour), exercising of some of the muscles, thus improving lung capacity (during heavy breathing)."...

Yeah, that's it.  Make it part of your daily exercise program! Bonus if you're actually healthy enough to have sex!

I had to have sex with eco-warriors to keep my cover!


An undercover police officer has defended having sexual relationships with unsuspecting eco-activists, saying they were ‘essential’ to maintaining a convincing cover story.

Mark Kennedy, who spent eight years posing as eco-warrior Mark ‘Flash’ Stone, has spoken out after learning that three women plan to sue the Metropolitan Police for emotional distress, saying he ‘duped’ them into sex.

‘I never conned anyone into having sex,’ he says. ‘I lived undercover for eight years and if I hadn’t had sex, I would have blown my cover. But I never used these women to gain information. The love we had was real.

What some guys won't do for their jobs...


Teen girls ages 15 to 19 who are vaccinated against HPV are not more likely to be sexually active, according to a survey in The American Journal of Preventive Medicine. Another positive finding is that sexually active girls who were vaccinated against HPV were also more likely to consistently use a condom than sexually active girls who were not. This data is directly counter to overreactive screeches from conservatives who claim that vaccinating teen girls will encourage them to have sex earlier. Hopefully this will shut them up for awhile (although I’m sure Rep. Michele Bachmann is eagerly awaiting a study to prove the HPV vaccine made a woman’s child mentally retarded as proof she’s not talking total BS). One might infer from this data that teenagers who have been exposed to the idea of protecting themselves against STDs — and, for younger teens, presumably have a parent or guardian’s support in keeping them protected — continue to make responsible sexual decisions. Who’d have thunk? [New York Times]

Seriously here, teens, both boys and girls should be vaccinated...

Hey, I'm not asking for me; I just don't want you to get breast cancer, really...


...My thesis is that breast cancer is essentially caused by sexual frustration. The focus of this hypothesis is aimed at the (un)consciously experienced tension and sexual dissatisfaction between the chosen mate based on socio-economic, intellectual, ethnic or cultural motives and the nonchosen potential mate who has more appealing sexual incentive properties.

In most western societies the improved economic independence of women has not changed to such a degree that long-term partners are chosen entirely according to sexual incentive properties. If the selected partner has no or weak sexual incentive properties for the other member of the couple, it is likely that sexual frustration will follow in the long run, which ultimately will cause breast cancer in some women...

If you need an excuse, this is a great one. 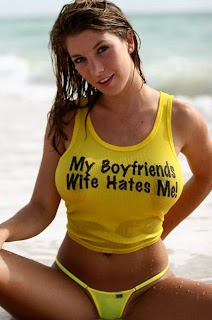 You can always count on the Brits to get to the heart of the matter...


A provocative new study shows that men who don’t cheat are setting themselves up for ‘socially-compelled sexual incarceration.’ Men who cheat, however, gives them the best of both worlds, sociologist Eric Anderson says.

And most of them who do still want to stay with their partner – they just want to have more sex on the side.

Prone to wander: A sociologist says that if and when men cheat, it's only to fulfill carnal desire

The American sociologist who teaches at the University of Winchester in England says monogamy has ostracised men from doing what they most want to do.

Well, duh; isn't that the function of monogamy?  Bug or feature?  I guess that depends on your point of view.  Or as  FishMag says, if you ever pass it up, you're behind forever...

William Teach at Pirates Cove linked it this in his "Sorta Blogless Sunday Pinup", but stop by and check out "If All You See ... You Might Be a Warmist"  too, as well as just looking around in general. And as always, I thank Wombat-Socho at the other McCain's who featured my full panoply of Rule 5 offerings this week in his massive roundup of Rule 5 posts.