From the Wombat's In The Mailbox: 06.15.22 (Afternoon Edition), Louder With Crowder, Reset The Clock – Biden Has Another Senile Meltdown. 'Bonchie' at Red State, Biden Unleashed: Geriatric President Screams and Rants Uncontrollably While Addressing Union Members. Breitbart, Joe Biden Calls it a Day Before 2:00 pm. It must be nice. Leah Barkoukis at Town Hall, Press Sec Wants Americans to 'Remember Where This Country' Was When Biden Entered Office. RNC Reminds Her. RNC Research@RNCResearch. "Karine Jean-Pierre says "we have to remember where this country was" when Biden "walked into office." Yeah, gas was $2.39/gal, inflation was at 1.4%, the markets were higher, and Trump was leading a great American comeback." Breitbart Reports DNC Reschedules Fundraiser with Kamala Harris for Lack of Ticket Sales. Liz Shield at Am Great, Morning Greatness: WH Says Biden Will Run for Re-Election in 2024, Also from the Wombat's In The Mailbox: 06.15.22 (Afternoon Edition),Victory Girls: Is Occasional Cortex Thinking Of Running For President In 2024?. And from Summit News, Trump Could Launch His 2024 Presidential Campaign Next Month, "Wants to show DeSantis “who the boss is”. At Al.com. Mo Brooks: ‘Donald Trump has no loyalty’ 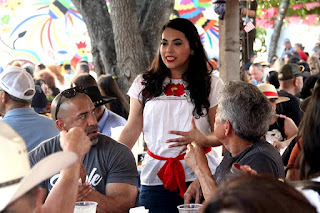 “The border’s a big deal, and they’re not doing anything about it,” the National Republican Congressional Committee chief said. “We are actually more in touch with the voters than our colleagues on the other side of the aisle.”

That’s not entirely fair. Democrats are also talking about “drag queens in every school,” too. Now that’s an issue that preoccupies voters in the RGV and in American households everywhere. 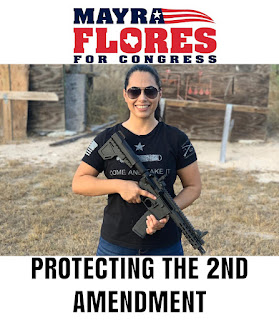 At Based-Politics, Democrat Congressman Calls Elon Musk ‘White Supremacist’ For the Dumbest Reason Imaginable. Voting for Mayra Flores. Dan Crenshaw@DanCrenshawTX "US House candidate, TX-2, When you think an African American immigrant voting for a Mexican-American woman is “white supremacy,” it might be an indication your brain is broken."

AllahPundit at Haut Hair worries Does Elon Musk's support for DeSantis 2024 matter?. Well, it won't hurt.  And  "The View" is in deep, deep, deep denial about the coming red wave.  "Most of us have no idea what we’re talking about. Annnnnnnd these idiots clearly have no idea either."  The Buwark Girlz fret How Big Is the Red Wave Going To Be?. AllahPundit also sees Bad vibes: Dr. Oz is underperforming Doug Mastriano in a new Pennsylvania poll. "How despairing you feel about these results depends on how charitable you want to be to Republican voters." He's not very charitable. 538 whines The New National Congressional Map Is Biased Toward Republicans, "Neither party was a clear winner in redistricting, but competition and people of color definitely lost."  Moshe Maryles at HE on  How One Congressional Primary May Determine the Fate of the Republican Party "If Katie Arrington were to win, this would just add to the allure of the Trump endorsement, and further cement the former President as the clear leader within the Republican party. If, however, Congresswoman Mace, who is endorsed by former South Carolina Governor and former US Ambassador to the UN Nikki Haley, were to hold on and defeat her Trump backed challenger, this would lend itself to a growing trend of the waning Trump endorsement." Mace won. Virginia Kruta at Da Wire, Democrat Predicts ‘Impeachment,’ ‘Violence,’ And ‘Even Civil War’ If Republicans Win In November

Paul Bedard at WaEx GOP presses for truth on Biden misinformation spy shop. "Talking points prepared by Ms. Jankowicz, the Board’s then-Executive Director appear to show that the department does in fact monitor American citizens and that the board’s work is concentrated on domestic threats." And speaking of misdismal information, Capt Ed points out how Unbelievable: DHS still looking to punish mounted Border Patrol agents falsely accused of "whipping"

The actual purpose of Nancy Pelosi’s J6 Committee is not to “investigate” what happened during the riot, since we all saw what happened with our own eyes, but rather to scapegoat and smear Republicans as part of the propaganda operation aimed at shifting votes in this fall’s midterm elections. They intend, furthermore, to intimidate anyone who might raise questions about the fairness of future close elections that Democrats win, and beyond that, to promote the impression that any Republicans who complain too much are potential “domestic terrorists.”

Mike LaChance at LI notes Democrats’ January 6th Show Trial Episode 2 Falls Dramatically in Ratings and Episode 3 is Postponed. Julio Rosas at Town Hall, J6 Committee Throws Temper Tantrum After Capitol Police Debunks One of Their Claims, but predictably, AllahPundit is holding out hope that they've got something, Jan. 6 committee video: Who were the "tourists" filming inside the Capitol complex the day before the insurrection? At the Right Scoop, BREAKING: Steve Bannon to go to trial, so he says he’s gonna have Pelosi subpoenaed to testify…. Now that could prove amusing.

Rep. Liz Cheney (R-Wyo., for now) is an object lesson. Cheney comes from a rich conservative tradition. Her mother Lynne wrote an estimable biography of James Madison. Early in her career, Liz herself consistently voted for and advocated for conservative causes.

Then, along came Mr. Hate.

The instigator: Donald Trump said mean things about her father, blaming him for the Iraq War. I will admit that Trump’s statements were a tad excessive since Dick Cheney, although clearly a key player, was far from alone in supporting that ill-conceived war. An extraordinary percentage did, including most of Washington, the pundit class (yours truly included), and, on occasion, Trump himself.

Rick Moran at PJ Media, Liz Cheney Will Not Win Re-Election to the House but She May Run for President and No Criminal Referrals to Justice Department From J6 Committee. Matt Margolis at PJ thinks Honest Liberals Know Trump Is Innocent and the J6 Hearings Are a Sham "Honest liberals?" More in sorrow than anger, at Town Hall, VDH on What the January 6 Committee Might Have Been. Jordan Boyd at Da Fed swears Clinton’s Debunked 2016 Russia Hoax Was Far Worse Than What Happened On Jan. 6. Via the Wombat's In The Mailbox: 06.15.22 (Afternoon Edition), Adam Piggott thinks The J6 Protesters Took Aim At The King & Missed.

The general consensus is that the January 6th event was a protest that got out of hand. A protest against the stealing of the presidential election from Donald Trump. There is also much chatter that the FBI orchestrated the invasion of Capital Hill by encouraging and provoking the crowd with agents and paid agitators planted in their midst.

While all of this may be accurate, it doesn’t take away from the very great folly of the protestors who found themselves marching into the government buildings. For they entered with no clear idea of their goals, nor even of their intentions. If your own intentions are so opaque as to render you uncertain of them, what then to your opponents’ minds in the heat of the moment? Caught up in an event that is on its way to getting seriously out of hand, the politicians who were the target of the misdirected frustrations could only speculate in real time at just what was coming for them.

There are photos of politicians in the House cowering in fear while lying prone on the benches where they usually sat in vainglorious pride while luxuriating in their own power. They were terrified because they did not know what was coming and thus they only had their own guilty consciences to examine in real time. No doubt as their imaginations ran riot with detailed knowledge of their crimes and betrayals of the American people, they would have easily convinced themselves that the protestors that were making their way through the politicians’ sacred ground were hell bent on inflicting the most terrible revenge.

It must be a terrifying thing to feel the gallows approaching and discovering that what you had always suspected about your true nature in the face of mortal peril to be true. Cowards really do die very many small deaths as they scramble to avoid the inevitable. They thought they knew what was coming and they knew that they deserved their fate.

The Peacoock  Feds indict man found with gun, pepper spray, knife near Kavanaugh's home. "Nicholas John Roske of California, 26, was charged with attempting to murder a Justice of the United States. Note how they avoid the word "assassination". At Da Caller, Despite Left-Wing Opposition, House Passes Security For Supreme Court Justices Via the Wombat's In The Mailbox: 06.15.22 (Afternoon Edition), at This Ain't Hell (but you can see it from here), Growing pressure to enforce law prohibiting picketing the justices’ homes. Shawn Fleetwood at Da Fed argues John Roberts’ Refusal To Release Dobbs Opinion Is Jeopardizing The Lives Of His Colleagues. John Sexton at Haut Hair, Unintended consequences: Since the SCOTUS leak, some states are acting as if Roe has already been overturned.

And some DIY on the Stupid Economy