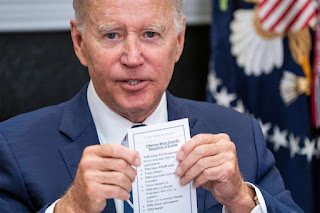 An amusing, if telling story, Vinn News, Biden Advisors Control Every Move…Even Remind Him to Say ‘Hello’. Twitchy, ‘YOU take YOUR seat’: Here’s a close-up of President Biden’s step-by-step instructions. At Da Wire, ‘YOU Take YOUR Seat’: Biden’s Notecard Has Step-By-Step Instructions For Everything, Like Walking Into Room And Sitting Down

At the Wa Free Bee, Biden Confidant: Start Firing People or Pack Your Bags "If I had any advice to Joe Biden, it would be to fire someone," Harpootlian told the Washington Free Beacon in a wide-ranging interview. "The people who are supposed to be serving you are not serving you." At Am Great the great Victor Davis Hanson explains why he thinks the Left Will Cut Biden Loose. Politico introduces The Dem governors who could run in 2024 if Biden doesn't. VodkaPundit at Insty, AS A COLORADO RESIDENT, I CAN’T WARN YOU STRONGLY ENOUGH AGAINST OUR GOVERNOR: Polis plots presidential run as Dems wheel Biden towards Shady Pines Rest Home. “Make no mistake about it, Polis is positioning himself to run for president the minute the Democrat Party checks poor old Joe Biden into the Shady Pines Rest Home.” Jon Gabriel at AZ Central asks Who needs a right-wing plot when progressives are busy eating themselves alive?. Yesh Ginsburg@yesh222,  "Is Kamala Harris the least-liked Vice President since Spiro Agnew? These numbers are kinda unreal." Robin M. Itzler at Am Think thinks Kamala Harris Needs To Spend Some Time At Toastmasters. Don't bother, just go away. At Parade Hillary Clinton Addresses Whether She'll Consider Running for President Again in 2024. She says no, but she lies.

The New Yorker worries Can Ron DeSantis Displace Donald Trump as the G.O.P.’s Combatant-in-Chief?. NR, DeSantis Leads Trump in 2024 New Hampshire Primary, General Election Polls. But Paul Bedard thinks Trump in control of 2024, and Pence surging vs. DeSantis. At WaT, Jerome Corse explains Why I support Mike Pence for president in 2024. Ugh. From Newsweek,  Steve Bannon Says Fox News Has 'Turned on Trump,' Favors DeSantis. Politico sees 2024 intrigue: DeSantis declines to ask Trump for reelection endorsement. Jon Chait at the Intelligencer explains Why Ron DeSantis Can Beat Trump in 2024 The party is deciding, and the voters are getting the message.

After saying she wouldn't WaPoo reports  Liz Cheney aims to recruit crossover Democrats in her primary "The move underscores an urgent effort to try to overcome serious vulnerabilities in the GOP race" At Haut Hair, AllahPundit is pleased, It's happening: Liz Cheney mailing fliers to Wyoming Dems asking them to vote for her. He's afraid it's not enough, though. Haut Hair also cites the NYT In Boebert's district, as elsewhere, Dems surge into GOP primaries.

Insty cites Roger Simon at ET, : No More ‘Reportorial Bias’—The Epoch Times to Host New Kind of Political Debate. "We are hosting a Republican primary debate in the Tennessee 5th Congressional  District without reporters. Replacing the reporters will be domain (subject matter) experts in key areas of interest to voters—health, immigration, the economy, and so forth. These experts—not journalists— will ask the questions of the candidates." A good idea; cut reporters out of the process.

The biggest piece of J6 related news today is the FBI/DOJ "Roger Stone" style raid on the house of the Republican chairman in Nevada, Jeffrey Clark, accused by the J6 Star Court of organizing an "illegal" plan for substitute electors in the 2020 election. 'Bonchie' at Red State writes of Joe Biden's Weaponized FBI Seizes Phone of Nevada GOP Leader in Ridiculous Move

Of course, everything is always simpler when it’s not sensationalized. So what did this “fake electors” scheme entail? All it entailed was some Republican electors pledging to vote for Donald Trump. As the report notes, that move was purely ceremonial and held no legal weight. No one ever actually tried to pass off any alternate electors to change the outcome of the election, and in the end, Nevada’s electors went to Biden.

As Carlson points out in his prologue, armed federal agents wearing body armor and carrying heavy weapons came to Clark’s house at dawn. They didn’t do so because he committed a violent crime or was trafficking human beings. In fact, he committed no crime at all. Yet, he was forced out of his home, denied the ability to even put pants on, and then submitted to a forcible search and seizure of his property. “Soviet” is the description offered, and it’s an apt one. This isn’t about “protecting democracy.” It’s about criminalizing the opposition.

Ace, Gestapo: Weaponized DOJ Raids Home of Former DOJ Official For Crime of Investigating Possible Voter Fraud Under Trump "The Priest Class has determined that this was The Most Perfect Election In History, and sends out its Inquisitors who punish anyone who questions their infallible pronouncements. PM, Biden FBI raids Trump DOJ official Jeffrey Clark, GOP officials, staffers in multiple states in 'alternate electors' investigation. NYT, cited at Haut Hair, Feds search home of former DOJ coup-plotter Jeffrey Clark. "It remained unclear exactly what the investigators may have been looking for, but Mr. Clark was central to President Donald J. Trump’s unsuccessful effort in late 2020 to strong-arm the nation’s top prosecutors into supporting his claims of election fraud." And  “The fact that there are Republican witnesses is very compelling.”  AllahPundit is OK with it, though, Revealed: The insane Jeffrey Clark coup plot. Also, Cheney to Republicans: I know it's hard to accept that Trump abused your trust. Althouse has  The hypocrisy montage you've been waiting for. Or fearing.

Why did the GOP take so long to put this together? Did the Gillum arrest finally light a fire under their sedentary ass? (The reference to Gillum comes at 9:48.) It's just amazing that they let Democrats go on so long about how horrible it is to deny the results of an election. They've been allowed to deny that they too are deniers. They've been denier deniers.

The redoubtable Julie Kelly at Am Great, Justice Department Colludes with Congress to Bolster the ‘Insurrection’ Narrative. Margot Cleveland at Da Fed, J6 Committee Focuses On Election Fraud Claims While Ignoring Tactics Used To Rig The 2020 Election "Stealing an election by fraud is not the only way to rig an outcome. Elections are rigged when systemic violations of election law occur." At Da Caller, CNN Dumps More Cold Water On Chances Jan. 6 Show Will Lead To Trump Indictment. Jordan Boyd at Da Fed, Investigators: Pelosi Responsible For Jan. 6 Security Breakdown At U.S. Capitol. From ET, Ideological Exile: Musician Cancelled for Going to Jan. 6 Rally Closes Book on Former Life to Begin New Chapter Daniel J Flynn at Am Spec, 6/16, Never Forget "Triumph the Insult Comic Dog goes the way of all comedy ca. 2022." "It turns out that the snarky, ironic humor of the type that made Stephen Colbert’s career irritates Stephen Colbert."

At Da Wire, Armed Man Found Near Kavanaugh Home Pleads Not Guilty To Attempted Murder. Lila Rose@LilaGraceRose, "BREAKING: The Department of Homeland Security is communicating with Catholic Churches and pregnancy centers, telling them to be prepared for a "Night of Rage" by pro-abortion groups pledging "extreme violence" the night of the Dobbs decision."

Say, how about some DIY on the Stupid Biden Economy?