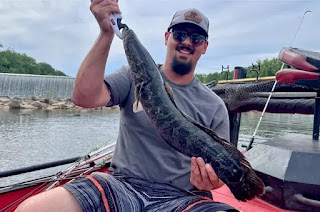 The peculiar-looking creature with the snake-like reference that Casey Shank reeled into his friend's boat on the Potomac River earlier this month was not something state wildlife officials wanted to see.

The 27-inch, 5-pound catch was representative of one of several invasive water species in Maryland which authorities say could spell trouble for the Chesapeake Bay and its tributaries.

This one is called the northern snakehead and the fact that Shank snagged it while fishing at Dam No. 4 south of Downsville was of particular concern to the Maryland Department of Natural Resources. 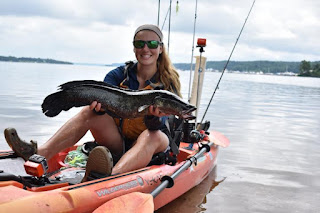 That's because the location is the farthest north on the Potomac River that the snakehead has been found since it was first discovered in the state — in Crofton in Anne Arundel County in 2002 — said Michael T. Kasiwagi, Western II Regional Fisheries Manager for the DNR.

The northern snakehead will eat fish, reptiles and amphibians and can "strike like torpedoes," according to the U.S. Fish and Wildlife Service.

Kasiwagi said there are established snakehead populations in watered sections of the C&O Canal along the Potomac River in Montgomery County. State wildlife experts believe that during high water flows on the river, snakeheads have been able to get from the canal into the river and go north. Other invasive fish species in the state include the flathead catfish, which was first found in the Potomac River in the Williamsport area and has steadily increased in population over the last six to eight years, he said.

"It's not completely unexpected, but it's not great news," Kasiwagi said of their arrival here.

If there's a way they can swim there, they'll make it. If they can't get over or around the dam, it will take awhile until birds drop enough of them on the wrong side of the dam for a pair of them to together and start a new wave. Or fisherman may move them, deliberately or  not.